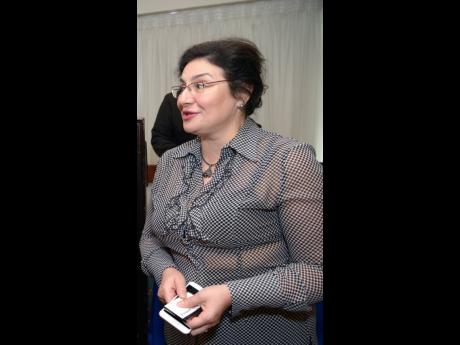 UNAIDS Country Director for Jamaica Manoela Manova is recommending condom distribution in prisons as an effective tool to help reduce the HIV transmission rate in local penal institutions. Noting that such a strategy has been shown to be beneficial...

Noting that such a strategy has been shown to be beneficial in countries such as the Muslim state of Azerbaijan, she told a Gleaner Editors’ Forum last week that, with the HIV infection rate increasing in Jamaican prisons, resurrecting the conversation around the issue is relevant and timely.

The increase is reason enough for condoms to be distributed in prisons, as part of the overall strategy to keep sexual transmitted infections down, according to Manova.

In response, senior director (acting) of the HIV/STI Unit in the Ministry of Health, Dr Alisha Robb, first pointed out that legislation regarding penal institutions did not rest with the Ministry of Health and Wellness, but acknowledged that the ministry could play a pivotal role by providing data to inform any decision regarding the care and treatment of HIV-positive inmates.

While she would support the condom distribution, Robb wants a study done beforehand to ascertain the real reason for the increase, whether it is a result of more prisoners entering the institutions already infected with HIV or if more of them have being contracting the virus after detention.

She said that, in the last five years, screening for HIV has increased for persons entering prisons to serve sentences, “so there may also be the avenue where we are having a higher percentage of persons being picked up for HIV within that setting”.

Jamaica AIDS Support for Life Executive Director Kandasi Levermore noted that, for years, the infection rate has been climbing, and that, regardless of the reasons, policymakers should act decisively to address the growing problem.

“We should be putting systems in place to ensure access to persons who need it, because it can’t be a good thing to sleep on, knowing that there is something that we could have done, as policymakers and as officials, government ministers and politicians to really guarantee someone’s health and we don’t do it,” she said.

“ ... We can do something at the initial (current) stage and then we talk a little bit more about how to foolproof that, but right now we continue to dance around those issues,” Levermore lamented.

In 1997, a bloody riot was stoked by outrage over then prison chief Colonel John Prescod’s backing of the distribution of condoms. Fourteen prisoners were killed in the four days of uprising after the announcement and several correctional officers walked off the job.

Fearing a similar uprising given the overwhelming negative response to what she saw as a well-intentioned initiative previously, human rights lobby Stand Up For Jamaica will not be backing another such call.

Instead, Executive Director Carla Gullotta would prefer if a comprehensive public awareness campaign is rolled out to help the inmates make informed choices.

She argued that supporting such a call would be a tacit acknowledgement on Stand Up For Jamaica’s part that homosexuality was rife among the inmate population.

“When you do an education campaign, I think the feedback is much better because you don’t tell them to do this or do that. No, you just try to educate them and then they will still be free to choose what they want to do, but their choices would be based on something that they learned,” she reasoned.