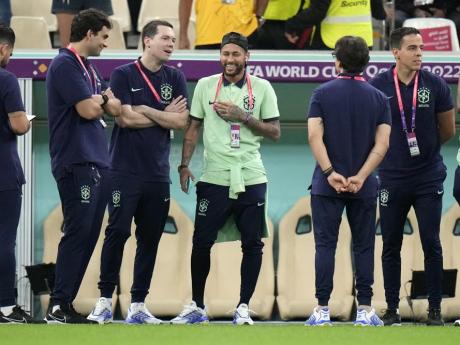 Brazil's Neymar (centre) speaks with his team staff prior to the World Cup group G football match between Cameroon and Brazil, at the Lusail Stadium in Lusail, Qatar, Friday, December 2, 2022. (AP Photo/Moises Castillo)

LUSAIL, Qatar (AP) — Injured forward Neymar was at Lusail Stadium on Friday to watch Brazil's match against Cameroon at the World Cup.

It was the first time Neymar joined his teammates at a match since injuring his right ankle last week in Brazil's opener against Serbia.

Neymar was not limping as he got off the team's bus at the stadium and appeared to be in good spirits.

He talked to teammates as they warmed up on the field and even played with the ball by the sideline.

Neymar was the only player who stayed at the team hotel during the match against Switzerland on Monday.

He had stayed behind undergoing treatment for damaged ligaments in his foot.

Right-back Danilo and left-back Alex Sandro, who also won't play against Cameroon because of injuries, also were with the team at Lusail Stadium.

Neymar was shown by the Brazilian football confederation earlier Friday doing drills with a ball at the team hotel. He had physiotherapy treatment in a pool Wednesday. Danilo and Alex Sandro practised separately at the team's training centre Friday.

Brazil, which has already qualified for the round of 16, needs a draw against Cameroon to finish first in Group G and set up a last-16 matchup against South Korea.