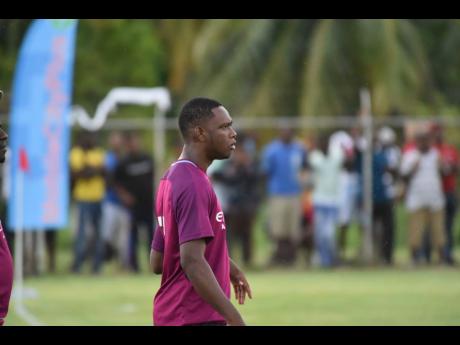 The game, which was the first of a double-header, started in bright sunshine but, after 15 minutes, the rain started to drizzle on the warm valley of Santa Cruz. Lacovia would have taken the lead in the 17th minute but the goal was controversially judged offside by the assistant referee.

Lacovia took the lead, officially this time, in the 34th minute from a Kevaughn Wright free kick to see them lead at the break.

Four minutes after the interval, Maggotty got the equaliser after Ronaldeno Pusey was left unmarked at the back post and headed home a rebound from close range after the Lacovia custodian saved a free kick.

The game was forced to a pause seven minutes later as the weather intensified. The delay lasted more than 30 minutes.

After the resumption, both teams created a few chances in difficult conditions. Maggotty, however, would feel hard done by after two of their goal-bound shots stopped in front of the goal on a waterlogged field. With the last kick of the game, Pusey had the goalkeeper wrong-footed in the six-yard box but the ball died in the water, allowing the goalkeeper to recover and hold on to the ball.

Despite feeling a bit hard done by in the conditions created by the inclement weather, Xavier Hendricks, coach of Maggotty, said they have to look forward and take control of their faith.

“I think we played pretty well despite the conditions. We fought well after the game resumed, although the ball could not roll on the surface,” Hendricks said.

Coach Fitzroy Ambersley described their fortunes with the water in front of goal after the resumption as a blessing.

“I would say it was God’s blessings. The Maggotty guy would have scored but God is with us. We just have to hold up our head and continue working as hard as possible,” Ambersley said.

“Our performance was good but it could have been better as some of the players started getting comfortable and started to lose the ball,” he added.

STETHS won the late game 1-0 over B. B. Coke High. Sanjay Allen scored in the 61st minute.

Over in Malvern, Sydney Pagon STEM Academy picked up their first points of the season with a massive away 2-1 upset win over Munro College.