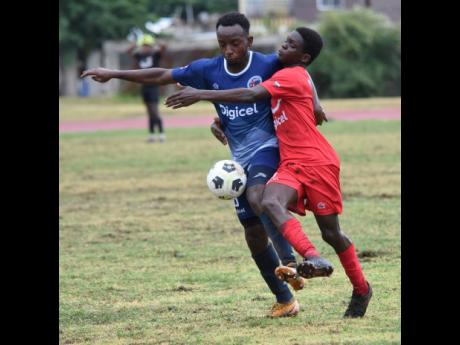 But the reigning champions booked their place in the second round with a five-star showing, defeating Bridgeport High 5-0 in their final group A game yesterday at Stadium East.

A double from Dwight Merrick in the 51st and 75th minutes, as well as strikes from Tarick Ximines (fifth minute), Shemron Phillips (38th) and Rayan Thompson (53rd) capped off a four-game winning streak for JC, who had only one point from their first two matches.

Ferguson said that he was pleased the see the response from his team – which won Group A with 13 points – considering their early struggles.

“I think we started the competition extremely slow. The objective at the start was to win the group. I think we did that. Kudos to the boys in terms of how they reacted after the first two games,” Ferguson said. “(I said) it would have taken three or four games to really get into our rhythm and that’s exactly what happened.”

The JC offence has exploded since that surprise 0-1 defeat to Kingston Technical High School (KTHS) on November 17 and has now scored 20 goals in that span, posting four consecutive clean sheets in the process.

Ferguson said that while he was cautious regarding where they were after two games, he had belief in his team that they would display the grit required to continue their title defence.

Bridgeport High School head coach, Fabian Taylor, admitted that they were outplayed despite their best efforts to contain the many-time champions, but believes that the shortened competition will give them a base to build on for the following campaign.

“When we started this group most of them never played a competition before, most of them didn’t make a team before, so it’s a lot of pluses in this team going forward,” Taylor said. “It’s hard to judge this team off of just six games. But we hope that things can get better. But I’m glad that there was a competition going on and the guys got some minutes on the field.”

Meanwhile KTHS could not capitalise on their opportunity to win the group after losing 2-0 to Calabar High School yesterday, leaving them in second place with 12 points. The Charlie Smith-St George’s College game was called off because of a waterlogged field.

In Group B, Camperdown High sealed their place in the second round as group winners despite a 3-3 draw with Excelsior High, as well as Tivoli Gardens Comprehensive High, who defeated St Jago High 3-1 to advance as the second-place team.

* Play suspended due to waterlogged field