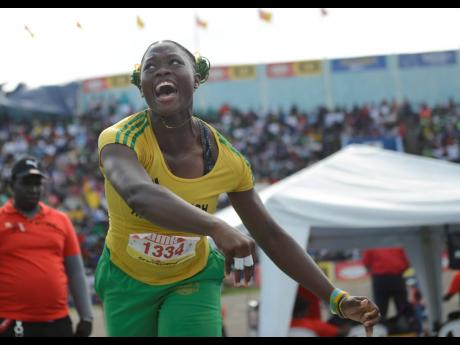 File
Marie Forbes of Vere Technical in action during the girls’ Class One shot put competition at the ISSA/GraceKennedy Boys and Girls’ Athletics Championships held at the National Stadium in Kingston on Saturday, March 30, 2019.

Forbes, who also had a short stint at Oberlin High School and who is a sophomore at Clemson, had an impressive win in her pet event, the weight throw, after a winning heave of 19.00 metres. She led with her third attempt, at 18.80 metres, before going on to win by a distance of 0.70 metres above her nearest rival, to carve her name in Clemson’s All-Time Top 10.

Campbell, a senior who captained Calabar High to their last ISSA Boys’ Champs title in 2017 – with a close three-point win over Kingston College – finished second in the men’s 60 metres hurdles in 7.74 seconds. He was edged out in his preliminary run by teammate Devon Brooks, who won in a personal best 7.71 seconds.

Jamaican Mark Elliott, who is the man in charge of the Clemson Track and Field programme, was pleased with both Jamaicans and his team’s overall performance at the meet.

“Overall it was a really good meet. We had a lot of top-10 marks. That’s what we want, to give us a good idea of what kind of shape they’re in going into the break, so when they return they will be in even better shape,” he said.

“We are all excited about that,” he added, on the school’s website.

It must be noted that in November 2020, the university (Clemson) had decided to cut the men’s track and field programme, which has a host of Jamaicans. But five months after, that decision was waived.