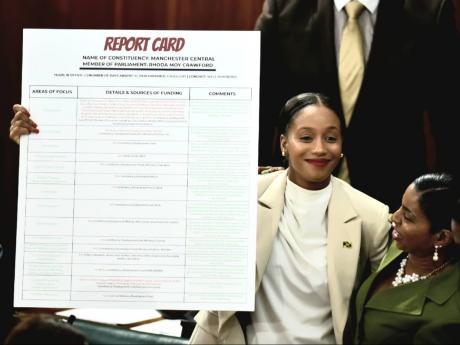 Kenyon Hemans
Rhoda Crawford, MP, Manchester Central, holds up a report card detailing her performance over the past two years after her presentation in Parliament on Tuesday, September 20.

“When completed, travel time to Mandeville will be significantly reduced,” Crawford said.

She was making her contribution to the 2022/23 State of the Constituency Debate in the House of Representatives on September 20. The MP also provided an update on the $410-million Greater Mandeville Water Supply System.

“This system is currently in phase two of four phases. When completed, residents in Mandeville and neighbouring communities will be relieved of decades of severe water challenges,” the first-term MP promised.

She also pointed out that the $80-million Greater Mandeville Traffic Management System, which aims to eliminate congestion in the rural township, is finally being implemented.

Meanwhile, the MP advised that plans are under way to construct a new $48-million state-of-the-art female ward at the Manchester infirmary.

Additionally, refurbishing of the Broadleaf Community Health Clinic is set to commence following a site inspection.