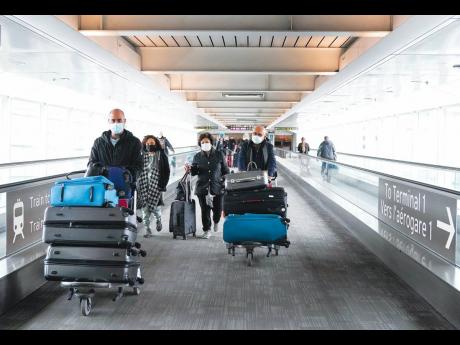 AP
People travel at Pearson International Airport in Toronto, Canada, on Friday, December 3. New travel testing and restrictions have been put in place due to the omicron variant.

Angela Anderson makes no secret of the fact that she does not take the coronavirus seriously because “I don’t think it’s a serious matter”.

The 56-year-old Brixton, South London resident recently returned to the United Kingdom from a month-long visit to Jamaica where she had travelled to bury her grandfather. Anderson refuses to wear face masks, or to maintain social distance, and she continues to socialise, a practice she maintained during what was her first visit here since the onset of the pandemic.

The South Londoner is planning another trip here in January and is unperturbed by the discovery of omicron, the latest variant of the highly contagious and deadly virus.

“I’m still going and the only thing to physically stop me is if they said to me that ‘as an unvaccinated person, you’re not allowed to fly’,” Anderson told The Sunday Gleaner. “That’s the only thing that will stop me.”

Discovery of the new variant of COVID-19 has left international and regional tourism officials and practitioners nervous and has once again rattled countries around the world, including the UK, Canada and the United States – three of the Caribbean’s top tourism markets. Many have since reintroduced various levels of travel restrictions, some of which – like the requirement for a PCR test and home isolation for vaccinated travellers returning to the UK – were recently removed.

Holidaymakers are also jittery and are reconsidering their own travel plans.

Amelia*, of South East London, has not travelled since May of last year when she flew home from Barbados where she had been stuck for several weeks after an international shutdown of borders due to the COVID-19 outbreak. Amelia was looking forward to returning to Barbados with her husband next month but is now uncertain and is likely to cancel the trip.

“I’m worried I might be stranded again,” she told The Sunday Gleaner. “I think right now you should be in the place you plan to remain for a long time.”

Amelia is not alone. The London-based independent travel agency, Fabulicious Travels, is already experiencing some hesitancy among its clients, 60 per cent of whom travel to Jamaica, owner Denise Bent told The Sunday Gleaner.

The majority of Fabulicious Travels’ bookings are for honeymoons and people who are visiting friends and relatives. And just as she was finding her footing again after nearly two years of severely suppressed travel, a new round of restrictions announced by British Prime Minister Boris Johnson, in an attempt to stem the spread of omicron – over 30 cases have been confirmed in the UK – has dampened consumer confidence.

“Everything’s kind of up in the air again. People are now starting to worry about the different tests and stuff like that. There’s hesitation, and all the way along I’ve had people who want to go, but they don’t want to do the tests,” revealed Bent. “People don’t want to be trapped in case there’s another lockdown.”

Discovery of the new variant comes at a time when visitor arrivals and hotel occupancy are on the rise here for the winter tourism season, with airline capacity and consumer demand outpacing the global average, according to the Jamaica Tourist Board (JTB).

It’s the sort of performance Jamaican tourism officials and stakeholders are bullish about, although fully aware that the omicron variant could easily reverse the gains if not handled carefully. It’s no surprise, therefore, that Edmund ‘Ed’ Bartlett, the tourism minister, opposes the sort of travel restrictions, which include temporary bans on international travel, imposed by some countries to curb the spread.

“The closing of borders has not proven to be a satisfactory deterrent, either to the infection rate or the economic recovery rate. What has worked are the protocols and these protocols, if adhered to, go a long way in mitigating the spread of the virus,” Bartlett told The Sunday Gleaner.

“So the requirement for testing and to have negative viral test results within 72 hours or a specific timeline and other biosanitary tools that are used to enable border access are the way to go while we all continue to manage the risk that this pandemic provides.”

The World Health Organization has also said that travel bans are of limited value and will “place a heavy burden on lives and livelihoods” and Joe Biden, the US president, in announcing stricter travel rules on Thursday after a handful of cases of the omicron variant were confirmed, made it clear his plan “doesn’t include shutdowns or lockdowns”.

Bartlett emphasised the importance of keeping borders open, insisting that the economic survival of the world depends on travel and cross-border activities.

“International trade in goods and services is dependent on that, and so to close borders is to close that and is to shut down the economies of the world,” argued the minister. “That is a doomsday prescription.”

At this stage, little is known about this new variant of the coronavirus, including whether it is more contagious, causes more serious illness, can bypass some of the protection given by vaccines and what should be done about it.

However, scientists say omicron is the most heavily mutated version of COVID-19 discovered so far, with Prof Tulio de Oliveira, the director of the Centre for Epidemic Response and Innovation in South Africa, telling a recent media briefing it was “very different” to other variants that have circulated and there were 50 mutations overall and more than 30 on the spike protein, which is the target of most vaccines.

Dr Swinburne Augustine, a Dominica-born research microbiologist and immunologist at the United States Environmental Protection Agency (EPA), whose research is being adapted for use in the fight against COVID-19, said it is still too early to tell how this variant will behave. However, Augustine advised that people should ensure they are fully vaccinated to limit their risk.

NORMAL FOR VIRUSES TO MUTATE

“Just like all the other variants, for unvaccinated people it’s going to cause problems for them,” the immunologist told The Sunday Gleaner. “If we can control the spread and get people vaccinated, I think we’ll get back to normal real quick and we won’t have to worry about variants.”

Augustine explained that it’s normal for viruses to mutate, and these mutations are not always dangerous. In fact, he told The Sunday Gleaner that there have been several variants of COVID-19, and while some appeared frightening on paper, they came to nothing. He cited as an example, the beta variant, which caused panic when it emerged but was quickly overtaken by delta.

“Something strange happened with delta where it became more transmissible but not as deadly. Sometimes when it changes the genes, it may get one benefit and it might lose something else,” the EPA scientist explained.

Even as vaccines were being developed to fight the virus, leading global voices were warning of severe consequences if rich nations hoarded more than they needed, as the US, Canada, Britain and the European Union pre-ordered enough shots to inoculate their populations several times over.

In a June 2020 message to the Global Vaccine Summit, convened to find and fund collective solutions for COVID-19-related vaccines and commitments and resources for other preventable disease, Antonio Guterres, the UN secretary general, appealed for “global solidarity to ensure that every person, everywhere, has access” to COVID-19 jabs.

Later that month, Frank-Walter Steinmeier, the German president, warned: “No one is safe until we are all safe. Even those who conquer the virus within their own borders remain prisoners within these borders until it is conquered everywhere.”

Still, while the rich nations throw away millions of doses – Canada has discarded at least a million jabs since last December, according to an informal survey by The Canadian Press – only about seven per cent of Africa’s population is fully vaccinated.

In the 15-member Caribbean Community, Antigua and Barbuda (57 per cent) is the only country with over half of its population fully inoculated, according to statistics from the Caribbean Public Health Agency (CARPHA). Barbados and Belize (47 per cent) and St Kitts and Nevis and Trinidad and Tobago (46 per cent), are the only ones with over 40 per cent of their populations fully immunised. Jamaica is at 17 per cent and Haiti is at one per cent.

“You have hundreds of millions of people not vaccinated, the virus spreading and one which has had other mutations before, so not unexpectedly, a new one has arisen,” James Hospedales, the former head of CARPHA, said of the latest variant. “And more of this will happen.”

Yet, while the poorer countries struggle to secure sufficient doses of vaccines, the UK announced on Wednesday that it had sped up signing new contracts to acquire 60 million additional Moderna shots and 54 million Pfizer doses for next year and 2023.

This move by the UK and the hoarding of jabs by the big countries is nothing short of a moral failure, Hospedales contended.

“Not only is it wrong from a moral point of view not to push as hard as possible to get everybody vaccinated, but from a technical point of view it’s stupid,” the former CARPHA boss told The Sunday Gleaner, “because if you don’t get the majority of the world adequately vaccinated, the virus has room to circulate [and] create new variants, which come back to bite you and your population.”