With gangsters monitoring their phones, residents on edge as hunt for wanted man intensifies 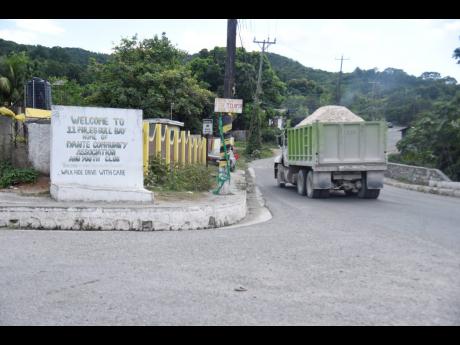 Nicholas Nunes/Photographer
Residents of Eleven Miles in Bull Bay, St Thomas, say they have been living in fear of gangsters in the area.

For the past five years, the streets leading to Eleven Miles in Bull Bay, St Thomas, have been largely deserted as fearful residents make a deliberate effort to lock themselves inside their homes, fearful that they could become targets of hits...

For the past five years, the streets leading to Eleven Miles in Bull Bay, St Thomas, have been largely deserted as fearful residents make a deliberate effort to lock themselves inside their homes, fearful that they could become targets of hits carried out by gangsters reportedly linked to one of Jamaica’s most wanted men, Nesta ‘Bigga Crime’ Morrison.

As she nervously scanned her environment on Friday, one female resident who was visibly in a state of discomfort told The Gleaner that the high level of crime in the area has caused many of the youths to move out of the community.

Among the few who have remained, she said, is a group of unemployed young men who frequent local bars to drink their sorrows away.

“The last couple years, we’ve had a lot of crime here,” said the woman, whose name is being withheld by The Gleaner to protect her identity, noting that the community was once peaceful and everyone got along.

On Thursday evening, she said that two helicopters hovering over the community as a detachment of soldiers flooded the area alerted her that “something a gwan”.

The Joint Anti-Gang Task Force seized three guns and more than 100 rounds of ammunition in that operation as they tried to apprehend Morrison, who still remains on the run.

The resident said the first gang-related incident that she could recall was about five years ago, when men affiliated with Morrison went into a bar one night and killed at least three people.

Another resident told The Gleaner that he has tried to steer clear of the gangsters, especially after returning home from work at night.

He said that when residents walk the streets to get home after dark, they do so with trust in God, knowing that anything could happen.

“Once you a say God, everything good, but as you know everybody woulda want to be comfortable,” he added.

Morrison has been linked to several murders committed in the Bull Bay area, Superintendent Allison Byfield, who heads the St Thomas Police Division, told The Gleaner on Friday.

She said that he is considered highly dangerous as he drives fear into the communities of Ten and Eleven Miles, and that his alleged criminal operations went as far east as Yallahs and into Llandewey, St Thomas, on some occasions.

“He walks around with an AK-47 rifle and a handgun,” Byfield said, adding that this, along with his trademark of shooting individuals in the face, were among things making him especially dangerous.

“Most of the hits for the gunshots are to the face, damaged beyond recognition,” she said.

Byfield said that Morrison held the various communities in his fearful grip by threatening locals and, in some instances, allegedly even going to the extent of illegally tapping their cellphones to find out whether they are speaking to law enforcement authorities or any outside source.

Morrison, who is reported to be originally from Ten Miles, in an area known as ‘Ball Ground’, is wanted for a 2020 shooting in which a cop was injured. The police officer was on an operation in the Eleven Miles area and was allegedly approached by Morrison and other gunmen. The incident is one of many in which he either features as the main suspect or a person of interest.