Correctional officer’s body found, appears to have been beaten 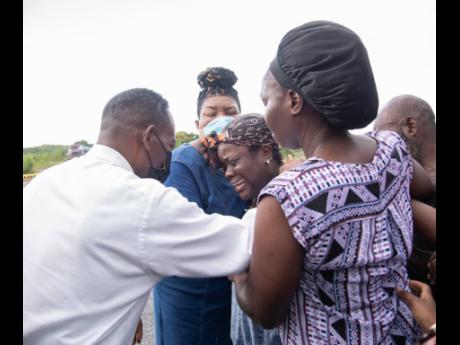 Gladstone Taylor
Persons console Misalyn Downer, after she identified the body of her brother, 38-year-old correctional officer Shannon ‘David’ Briscoe, which was pulled from a gully in Seaview Gardens, St Andrew yesterday.

“Heart-rending, if I have to choose one word.”

That was the response from a senior member of the Department of Correctional Services (DCS) yesterday, immediately after identifying the body of 38-year-old correctional officer Shannon ‘David’ Briscoe, after it was pulled from a gully in Seaview Gardens, St Andrew, about 2:30 p.m.

The body was said to be badly decomposed and indications are that Briscoe had been badly beaten, as the lips were swollen and the face disfigured.

Despite this, Misalyn Downer was able to positively identify her younger brother, who, along with his two daughters, had lived with her.

Downer broke down and collapsed soon afterwards and was only prevented from falling by a woman who had been comforting her.

Briscoe, who is from Seaview Gardens and worked at the Horizon Adult Remand Centre in Kingston, was last seen about 5 p.m. on Thursday, en route to Half-Way Tree and Seaview Gardens.

His car was found in Trench Town in western Kingston on Friday.

“This is a gloomy day for the team, especially at the Horizon Adult Remand Centre where CO1 Briscoe was assigned up to the time of his death. We are intolerant of this unnecessary and selfish act of crime. We take this matter seriously and will be working with the Jamaica Constabulary Force in whatever way we can, for those responsible to be brought to justice,” Commissioner of Corrections Lieutenant Colonel (Retired) Gary Rowe said in a statement yesterday.

“It is extremely sad and we are heartbroken. We believe in rehabilitation and we work with people (criminals) of this kind every day, and to see one of us being viciously taken out like this, it is sad,” a senior DCS officer, who was overcome by grief, told The Sunday Gleaner.

“It is sad, but we still believe in rehabilitation. We believe that all persons can be rehabilitated, though not all will be and we continue to work hard to make Jamaica a safe place to live.”

As news spread confirming that the body found was Briscoe’s, a wave of grief rippled through the crowd that had gathered at the scene, with some persons saying, “David nuh deserve this.”

Some recounted how helpful he was, always willing to go for them, no matter where their vehicle has broken down or how late it was.