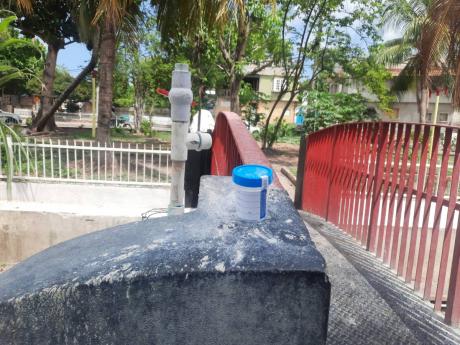 Corey Robinson
Water samples tested from the standpipe in Arnett Gardens, St Andrew, which is fed by a well on the Tony Spaulding Sports Complex, found that it contains coliforms – a type of bacteria that indicates it has been contaminated by faeces. 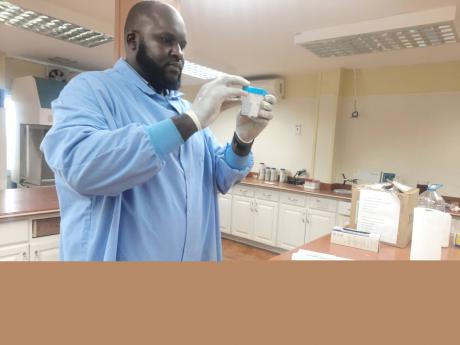 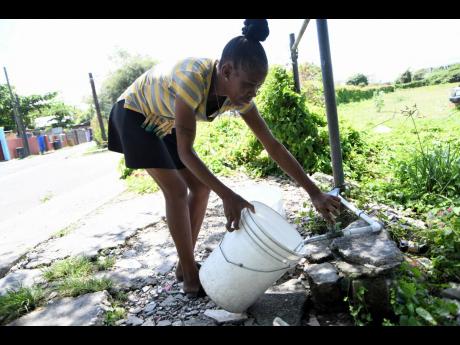 An NWC-commissioned standpipe at an intersection at the entrance of Rose Town on Spanish Town Road in Kingston serves hundreds of residents of that community and many others.
1
2
3

Corey Robinson In a tree-filled community park opposite the Tony Spaulding Sports Complex in Arnett Gardens, St Andrew Southern, stands a water pipe that serves hundreds of residents. But water samples tested from it found that it contains...

In a tree-filled community park opposite the Tony Spaulding Sports Complex in Arnett Gardens, St Andrew Southern, stands a water pipe that serves hundreds of residents. But water samples tested from it found that it contains coliforms – a type of bacteria that indicates it has been contaminated by faeces.

The standpipe is served by a well on the complex and is primarily intended for irrigation for the football field. But with years of potable water neglect, and countless promises from the National Water Commission (NWC), residents are forced to turn to the tap for regular household use. They discovered the hard way, however, that drinking the water leads to dire health effects.

Even the children know.

“Sir, sir! A nuh drink you a guh drink it? Don’t drink it because it is going to hurt yuh belly!” shouted a child among a group of boys playing in the roundabout park.

“You can’t drink it. If you drink that, you’re going to vomit,” he stressed, brows curving with curiosity as this reporter filled a sterilised container with a sample for testing last week.

According to the results of the potability test conducted at the Department of Microbiology at the Northern Caribbean University (NCU), the sample contained the coliform bacteria, which indicate “faecal contamination of the water sample”.

“People don’t even like storing that water because after a while when you store the water in the drum, the water starts to smell funny and grow some things like morass in it,” explained Ashenna Douglas, a teacher and Arnett Gardens resident.

“Mark Golding (St Andrew Southern member of parliament) needs to come and do something about the water situation in Arnett or come and treat the well water or something,” posited Douglas, noting that water lock-offs are sporadic and can last up to five days, as was the case last week.

The Arnett Gardens outlet was among 12 standpipes sampled in a probe by The Sunday Gleaner and the NCU last week. The water sources were chosen randomly from locations in St Mary, Portland, Kingston and St Andrew, Westmoreland, Trelawny, St James and Manchester.

This was the only outlet in the study not regulated by the NWC, and it was the only sample that was found to have 25 coliforms per 100 millilitres of water collected. The other samples from the NWC-treated sources contained no coliform.

Coliforms, the researchers pointed out, are a group of bacteria commonly found in the environment, for example, in soil or vegetation, and in the intestines of mammals, including humans. Its presence indicates that the water supply may be vulnerable to more harmful microorganisms.

“Coliforms themselves are not necessarily pathogenic, but can indicate the presence of several disease-causing organisms, which include Salmonella spp, Shigella spp, Vibrio Cholerae and parasites such as Cryptosporidium parvum,” explained Anton Lloyd Irving, microbiologist and lab coordinator, as he emphasised the devastating implications of a cholera outbreak.

It would require a more in-depth analysis to determine exactly what harmful microorganisms exist in the sample, researchers attached to NCU’s College of Natural and Applied Sciences, Allied Health and Nursing explained.

Jamaica’s last cholera outbreak was in the 1850s and estimates are that it killed some 10 per cent of the population before it died down in Kingston.

For now, there has been no official report of any resident of Arnett Gardens becoming gravely ill after consuming the contaminated water, and still no knowledge of just how widely the contaminated commodity is being used. Like clockwork, residents are allowed to fill up a few hours twice a day: morning and evening.

Golding, who is also president of the People’s National Party (PNP), noted that it was common knowledge that the water ought not to be consumed.

“There is a well at the complex that is used for irrigation of the football field. It also provides non-potable water for other community uses: for example, flushing toilets at the school and so on because sometimes in the drier areas, the NWC supply can be sporadic in some communities,” said the political representative.

“The water is not for drinking purposes, and they are aware of that. This predates me. These arrangements were put in place from before I became involved in the constituency. My understanding is that it has always been known to everybody that it is from the well.”

“It is not a drinking water well, but when there is no water in the pipes from NWC, they (residents) are going to have access to the water to do whatever,” noted Golding, adding that only last Thursday he had meetings with NWC representatives about the problem.

He said there are at least two water solutions to be put into effect by the NWC later this year; but until then, residents are desperate. In the toughest times, they are forced to boil the contaminated water from the tap for drinking.

Failing that, they will have to use water trucked to the area or hire handcarts to move buckets of water from nearby locations such as Rose Town.

The researchers confirmed that boiling the water can kill the bacteria.

Not far away, an NWC-commissioned standpipe at an intersection at the entrance of Rose Town on Spanish Town Road in Kingston serves hundreds of residents of that community and many others like David Russell of Greenwich Town.

Russell was seen filling buckets last Thursday, putting them on a cart, which he pushed back to his home.

Elderly vendor Jaqueline Chambers, who sells snacks metres away from the pipe, said she doesn’t have that luxury.

“It is a long time since we don’t have any water and I have to be lifting buckets up and down. Is it mash up my hand,” she said, pointing to a section of her right arm.

Not far from there, at two other standpipes in the war-torn areas of Harris Street and George’s Street, and at the Ramsey and Raphael roads intersection, groups of women complained about the lack of sustained potable water, and the inability to frequently wash their bodies because of it.

In Ambrook Lane and in Standpipe, St Andrew, residents disclosed that their water supply has improved over the years, and that reliance on the communal water sources has diminished.

There were, however, major issues for residents of 10 Miles in Bull Bay, St Andrew, who complained about access to the commodity. A community standpipe was recently destroyed in the area to make way for road construction work linked to the Southern Coastal Highway Improvement Project. Since then, residents have been utilising another pipe left in an open lot, ironically, after the house around it was destroyed for the building of the highway.

That outlet has no tap, however, and residents attached and bent a hose to stop it from flowing freely.