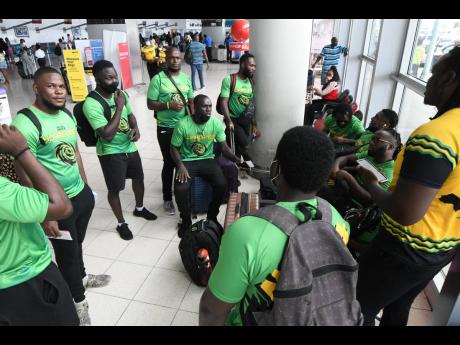 Rudolph Brown/Photographer
Members of Jamaica's Rugby League team gather after being stranded at the Norman Manley International Airport as flights were cancelled because of labour unrest by air traffic controllers on Thursday. 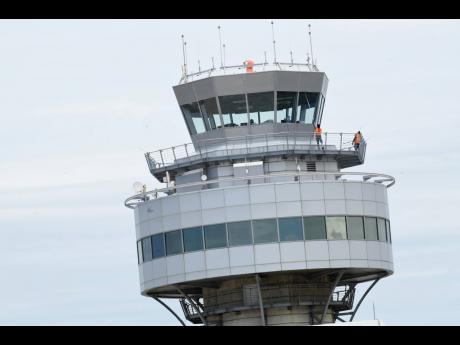 The Jamaica Civil Service Association (JCSA) has issued a Monday, May 16, deadline to the Holness administration after a crippling three days of industrial action that sparked a national water lock-off and the effective closure of the country’s airspace for much of Thursday.

The current offer on the table for the civil servants is the second from the Ministry of Finance that has not found favour with the workers, said JCSA President O’Neil Grant.

The 103-year-old organisation has accused the Dr Nigel Clarke-headed Ministry of Finance of undermining the collective bargaining process in relation to items negotiated over many years that are now about to be discontinued. Those grievances are likely to include the rationalisation of duty concessions on vehicles.

“What we want is for the Ministry of Finance to look carefully at the JCSA’s claims to ensure that the items that we have in the claim are properly evaluated and responded to,” Grant argued.

“We want them reconsidered because there needs to be respect for the collective bargaining process,” he added.

The JCSA president said that the negotiators in the finance ministry were not treating union issues with the level of seriousness they desire.

“There’s no way that a ministry can get a letter from a JCSA and ignore that, so we have said to the ministry that that is a violation as well, and we want that to be remedied,” he said.

Not prepared to back down from their stance, the JCSA president said his members have lost trust in the finance ministry because of breaches of transparency. This, he said, has exacerbated worker anxiety.

It has been a week of woe for the Government after NWC workers shut down 1,000 water-production facilities, sending jitters throughout households, businesses, hospitals, and the hotel sector.

The NWC’s action was followed by air traffic controllers Thursday, causing the cancellation of 40 flights into the island, leaving thousands of travellers stranded here and abroad.

The controllers, in a media statement issued Thursday afternoon, denied they went on strike, stating that critical equipment was in need of repair and that they were forced to withdraw services because of safety concerns.

The green light was given for the resumption of flights at approximately 5:30 p.m.

There is resistance within the JCSA to the Government’s plan to push ahead with the implementation, and the union is not getting enough information to give them proper feedback.

“That is where the problems are really at. We are hoping that the ministry will understand that these matters are being joined together because our current compensation has implications for our future compensation if we don’t negotiate our benefits properly,” Grant said.

The JCSA president is urging the finance ministry to review union concerns so that they can move together as partners.

“The workers are now starting to distrust the whole thing. As early as yesterday (Wednesday), we got such a request, and that is fuelling the distrust,” said Grant.