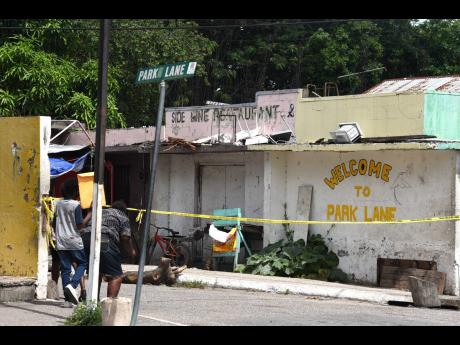 File
A lovers' spat is believed to have spiralled into gang warfare in Park Lane and other areas of St Andrew.

The police say they are aware of “deep issues” between an estranged couple that have been theorised to be the trigger for a rash of murders, shootings, and an abduction in Cassava Piece, Park Lane, and Red Hills Road. The domestic conflict has...

The police say they are aware of “deep issues” between an estranged couple that have been theorised to be the trigger for a rash of murders, shootings, and an abduction in Cassava Piece, Park Lane, and Red Hills Road.

The domestic conflict has spiralled into gang-like warfare, residents of the communities have reported.

“We are aware of issues with them,” said Fletcher, who revealed that there are reports of the woman’s sister being a key actor in the feud.

The Gleaner has not published the names of the estranged couple because they have not been formally charged.

The latest incident, a murder and shooting, occurred in Cassava Piece on September 3 at a memorial event in the community.

The target of the attack was reportedly a man known as ‘Lucky’, the brother of the alleged bitter babyfather.

The separated couple, Jamaican migrants who have returned from the United Kingdom, are reportedly wealthy and have been accused of financing the ongoing violence. Among the possessions at the centre of the post-break-up dispute are two Mercedes-Benzes and a mansion in the Old Harbour area.

“She divorce him and tek a different man weh come from Riverton. Him cannot read, so most of the things inna fi her name,” said a resident who has been tracking developments.

A sister of the woman is also at the centre of the controversy and is said to be the former spouse of deceased Park Lane don, Dennis Wilson.

He was fingered in the September 3, 2020, murder of a man in Cassava Piece. The deceased was the nephew of the returned male migrant from the UK.

The police had charged Wilson, who was released on bail after three months behind bars.

Prior to Wilson’s death, there was an abduction of another area leader, Shadari ‘Kishi’ Bryan, also from Park Lane, on July 24.

That abduction is believed to have arisen from an internal conflict with persons associated with the bitter ex-lovers, which further resulted in the deaths of three men from the community and injury to four others.

Reports are that men posing as police approached Bryan in the community and took him away in a Toyota Probox. That was the last time he was seen alive.

NO WORD ON MISSING MAN

Fletcher told The Gleaner that there has been no word on the missing man to date. It is unclear whether he is still alive.

The St Andrew North police chief said the lawmen have visited suspected sites, but Bryan’s body has not been found.

While the police have not been able to link the incidents, Fletcher said that all anecdotal accounts are being investigated.

“If there is any, we have to be sufficiently knowledgeable to be able to dissect the conflict to see where it originated,” the divisional commander said.

“It could be, and I am not ascribing any motive. So as to sell their story, someone might want to [conflate] the separate conflicts into one big conflict to make it sound even more palatable,” he said.

Up to August 28, the St Andrew North Police Division recorded a 17.4 per cent reduction in murders and 37 per cent fall in shootings.

A total of 38 persons were murdered compared to 46 the corresponding year.

There were 20 fewer shootings, totalling 34, compared to 54 for the corresponding period in 2020.