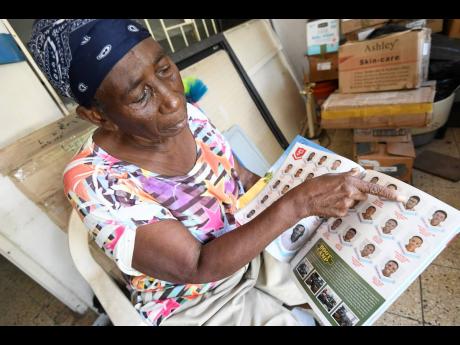 Rudolph Brown/Photographer
Ellin Williams, grandmother of 17-year-old D’Marko Levy, points him out in a yearbook at her Patrick City on Monday. Williams was killed on Gore Terrace in a botched phone transaction on Saturday. 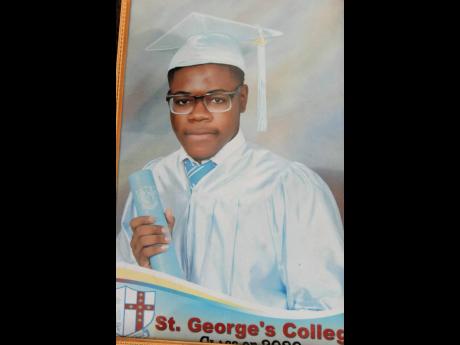 Gunmen posing as potential buyers of an iPhone Pro 11 shot and killed the 17-year-old owner on Saturday just three days shy of his 18th birthday, plunging his family into mourning. The incident occurred along Gore Terrace in St Andrew about 12:50...

Gunmen posing as potential buyers of an iPhone Pro 11 shot and killed the 17-year-old owner on Saturday just three days shy of his 18th birthday, plunging his family into mourning.

The incident occurred along Gore Terrace in St Andrew about 12:50 p.m.

The deceased, a St George’s College class of 2020 graduate, D’Marko Levy, would have celebrated another birthday today but his life was cut short at the drop-off site after he advertised the gadget online.

He had told his grandmother of his plan to use the cash from the sale to assist his family in relocating after they were given notice by their landlord. The phone was allegedly priced above $100,000.

“Him have business mind and business intentions because when me see him do the phone business, sometimes me a discourage him. Mi just nuh like it, but him say, ‘Mama, mi haffi gwaan do something cause the COVID a gwaan,” she told The Gleaner.

Williams was keen on Levy returning after his phone transaction having asked him to purchase something before the 6 p.m. curfew.

But she was jolted shortly after by a phone call that ‘Sonny’, as Levy was affectionately called, had been shot.

Levy’s aunt, Sharon Porter, who raised him since he was one year old, told The Gleaner that he was no troublemaker.

“I try to talk to him as best as I can and tell him watch the crowd and his friends, everybody can’t be his friend,” Porter said, wiping away tears.

She said that although Levy grew up in her care, he had a relationship with his mother, who would visit from time to time.

“His mother is devastated. I really need someone to talk to his mom because she is really out of it and I don’t want anything to happen to her,” Porter said.

Like the teen’s grandmother, Porter said she was not sold on Levy’s dealing in gadgets – a passion that began when he was in grade 10.

“I go as far as tell him, even your own friends at school can don’t like what you are doing and set you up. They don’t have to be there. They can send somebody,” Porter continued, muffled by tears.

It appears that Levy disregarded counsel from Porter that he complete the transaction at either of two service stations near the intersection of Dunrobin Avenue and Constant Spring Road.

Levy was in the company of his younger cousin, who ran away after the explosion and on hearing one of the gunmen telling the other to shoot him as well.

Levy was shot once in the chest, The Gleaner understands.

It was a passer-by who contacted the police, who transported him to the University Hospital of the West Indies, where he was pronounced dead.

The St Andrew Central police are probing the murder and robbery incident.

Meanwhile, the police Corporate Communications Unit (CCU) is urging persons conducting transactions to do so at a police station.

“Whatever is it that they are selling, they just go to the station, speak with someone there, the station guard or officer, and explain to them what transaction they are carrying out. The officer will see to the transaction,” the CCU said.