In a battle of egos, fishers show sharks no fear 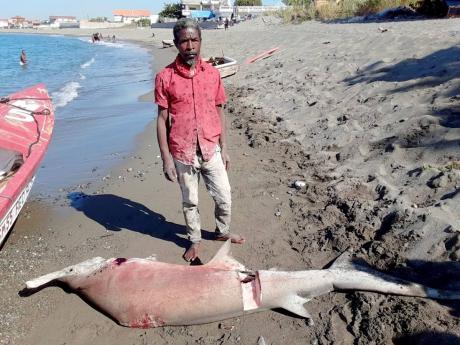 Photo by David Henry
Michael Moore, fisherman of Bull Bay, with a hammeheard shark that was caught in his net on the weekend. 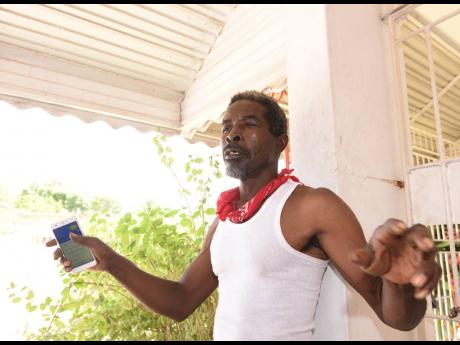 Kenyon Hemans/Photographer
Fisherman Michael Moore, in whose net a shark got tangled on the weekend, says that deep-sea fishing is dangerous.
1
2

Ian Dawson, 64, has come face to face with sharks too many times to count. But the secret to survival, he says, is to show no fear. “Sharks, like most living things, move based on your fear ... . Once you face them, them haffi think twice,” the St...

Ian Dawson, 64, has come face to face with sharks too many times to count.

But the secret to survival, he says, is to show no fear.

“Sharks, like most living things, move based on your fear ... . Once you face them, them haffi think twice,” the St Mary spearfisher told The Gleaner on Monday.

He recounted an experience in which a tiger shark surreptitiously glided towards him.

“Mi face him and hold mi gun pan him and mi a look fi mi friend now fi tell him what the situation, and when mi spin round, mi almost kiss him the way him deh back a mi a hide,” he said, bursting in laughter.

But there is no laughter in Savanna-la-Mar on Jamaica’s west coast in the wake of Saturday’s fatal attack on 53-year-old Donovan Haywood.

The veteran fisherman lost his arm in a half-hour-long battle with a shark as his partners fought to rescue him. Haywood later died.

Dawson’s colleague, Ray Grant, acknowledges that the big fish of the sea test bravery to its limits.

Grant, 49, says his most recent brush with danger caught him and two others by extreme surprise. After believing the shark had already vanished, it suddenly started chasing them to shore.

“When we move and a come down, mi hear a guy pan di rock say, ‘A weh da black something deh back a unnu ... . When me turn round and see di size shark, him bigga dan di three o’ we!” he exclaimed.

They were saved by his quick-thinking friend, who threw an eight-pound fish towards the shark, giving them time to make their escape.

“The three o’ we a go back in and mi just hear when somebody say a wah da black something deh behind you. Come him a come after we and naa ease up,” he shared.

Grant explained that the incidence of shark sightings increases during good fishing seasons. One such time is in October, when the widely enjoyed Nassau grouper floods Jamaica’s waters.

While Grant and Dawson say they refrain from hunting sharks, other fishermen have been earning from the delicacy.

Over in eastern Jamaica, Michael Moore, a fisherman in Seven Miles, Bull Bay, said persons have been hounding him and other fishermen for shark meat.

He said that sharks occasionally get caught in their nets overnight, but they are often cut loose because they are aggressive, heavy, and unwieldy to manage.

“Sometimes it come in like it’s straining you just fi bring it in by two of us, but with the help of the net, we roll it over into the boat,” Moore said of last weekend’s catch of a shark weighing approximately 200lb.

Though shark meat fetches prices of $300-$400 per pound, Moore said he doesn’t sell the meat – he gives it away and keeps the fins.

“The fin is the most important, expensive part of the shark. Most people take it boil soup,” he said, alluding to the mythical aphrodisiac powers fins purportedly hold.

The most common sharks they have seen are the Tiger shark, White Belly, Hammerhead and Nurse shark, which is said to be the least harmful.