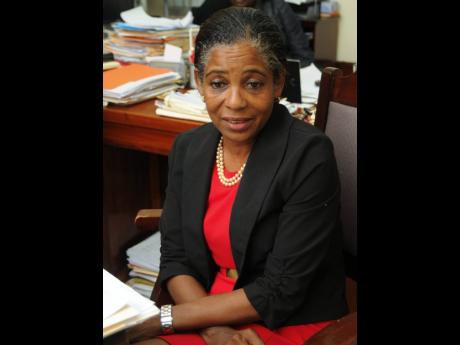 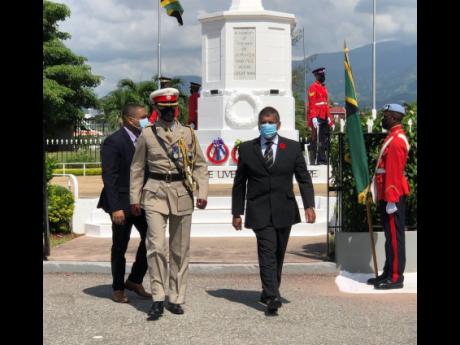 Photo by Andre Williams
British High Commissioner Asif Ahmad (centre) walks back after laying a wreath at the cenotaph at National Heroes Park in Kingston yesterday in honour of servicemen who fought in World Wars I and II.
1
2

Retired Major Johanna Lewin believes that occasions like Remembrance Day to honour war veterans are still momentous even when all the battle warriors have passed away.

“They gave their lives for us. They made a lot of sacrifices, and many of them came back home and contributed significantly to national development,” Lewin told The Gleaner on yesterday’s Remembrance Day, dedicated to honouring servicemen from World Wars I and II.

“Even if you take one aspect or the other, a lot of them got training overseas while they were there, which made them much more able to contribute [to their home countries],” added Lewin, who now oversees the welfare of local veterans.

Hundreds of Jamaicans served in World Wars I and II, fighting alongside British and Canadian soldiers. They were honoured in a national memorial service and wreath-laying ceremony held at the National Heroes Park yesterday.

Lewin told The Gleaner of one veteran who is currently unwell and in need of blood.

“He lied about his age [in order to go to war]. I think he was 14 or 15 when he got on that boat and went across the Big Pond with the torpedo boat and all of that at great risk. Some of them probably did not understand the risk at the time, but it doesn’t matter. They wanted to serve, and that was what they did,” she said.

“Of that, the majority – about 5,000 or 5000-plus – were from the Royal Air Force, which is the main organisation that I represent, but these guys gave a lot and even so when they are gone, even when the ones who are alive now are gone, we have to remember them and their sacrifice and their services,”she said.

“This is why we have freedom – because of the war and because we won it. The Battle of Britain, which we celebrate in September every year, was considered by the world and Winston Churchill, who was the [British] prime minister at the time, to have been the epic battle that won WWII,” Lewin continued.

British High Commissioner Asif Ahmad, who was among the guests and who laid a wreath in honour of the veterans, told The Gleaner that he was moved by the occasion even though the service had to be adjusted because of COVID-19.

“It’s moving to see the remembrance I’m used to in the UK carried out with such sincerity and solemnity here in Jamaica. It’s poignant to remember that many people from Jamaica served in the British Forces, and so we honour them. My only regret is that this year, I could not greet the veterans in person like I’ve done every year since I’ve been here,” he said.

Some of the veterans were not able to attend yesterday’s service in person as they are among the high-risk groups for COVID-19. andre.williams@gleanerjm.com