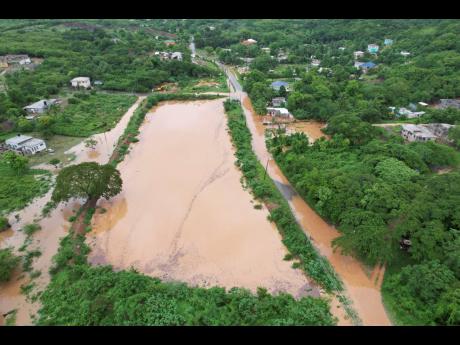 Ricardo Makyn
An aerial view of Big Pond in Bannister, St Catherine, which is perennially flooded.

The US states of Florida and South Carolina are still counting the cost of being hit by Hurricane Ian. Central Florida, particularly, took a pummelling. Buildings were destroyed. Millions of people lost power. Many may have died. It will be a long haul to full recovery. America, fortunately, has the economic wherewithal to make it easier.

Before slamming into the American states, Ian, packing winds of up to 129 miles an hour, caused substantial damage in Cuba. Fortuitously, the storm, whose outer bands had threatened to sideswipe Jamaica, veered away before swinging towards the western regions of Cuba. So last week Prime Minister Andrew Holness was able to report to Parliament that the cost of the damage from the storm was only J$360 million and “not in the billions”.

His finance minister, Nigel Clarke, Mr Holness quipped jokingly, was “sitting very easy, very calm”. We, too, are happy that the situation wasn’t, as was threatened, far worse. But there is no cause for policymakers to be smug.

The storm’s relatively light impact on Jamaica notwithstanding, it again laid bare the country’s perennial failures at planning and the seeming inability of public officials to consistently do the small things and get them right. Like cleaning drains and gullies. Or not putting buildings in areas prone to flooding without taking measures to mitigate the effects. Put another way, the J$360 million that it will cause to repair infrastructure pales in comparison to the impact on the lives of individuals and communities – the social cost of the storm.

Like its Caribbean neighbours, Jamaica won’t escape hurricanes. Each year, between June and November, is the Atlantic hurricane season. With global warming and climate change, the storms are apt to be more frequent and violent.

When they hit the potential for loss of life and negative economic impact is greater.

Indeed, as the Government noted in its recent 20-year disaster risk management green paper, up to the year 2040, approximately 88 per cent of the population lives in areas susceptible to at least three natural hazards. Moreover, 82 per cent of Jamaicans and 70 per cent of major industries, including agriculture, are located in areas vulnerable to meteorological hazards. Over the past two decades the cost of disasters was US$1 billion. The annual average bill for hurricanes was US$67.3 million, or half of one per cent of GDP.

The strategy, especially in the face of climate change, is for Jamaica to shield itself against the worst effects of natural disasters. That, however, must start with the exercise of basic common sense. Tropical Storm Ian underlines this point.

Landslides on hillsides and breakaways treacherous roads apart, most of the storm’s impact was from flooding. And these happened in where they usually occur. In that sense it was predictable – and in many cases quite avoidable.

South-central Jamaica, the parishes of Clarendon and St Catherine, which bore the brunt of the flooding, much of the blame rests with the inadequacy of the drainage systems and the failure of administrations, over decades, to properly deal with the problem. Part of this is because governments haven’t been able to afford to do so.

That, however, isn’t the whole story. In many communities the inadequacy of drainage systems is exacerbated each storm season by failure of the authorities to keep what exists clean – whether in Kingston and St Andrew or in Cornpiece in Hayes, Clarendon or in Halse Hall, in the same parish where 81-year-old Valda James has lived with periodic flooding for over six decades. Indeed, across the island, residents complain of garbage-clogged drains and gullies, including some with small islands, with large trees growing on them. When the rains come, they overflow, often into people’s homes.

Further, drain cleaning appears to be a seasonal exercise, rather than an ongoing function of community cleansing and infrastructure maintenance. So, in June or July there is a special allocation, announced with great fanfare, from the central government to the municipalities for drain cleaning. Usually, the money, and its management, are inadequate. Generally, there is little evidence that taxpayers get value for money.

There, too, is the flummoxing approach to policymaking and project implementation that raise awkward questions when events such as what emerged from Tropical Storm Ian occur. Five years ago, US$20 million was spent to widen, and raise, 2.44 kilometres of Marcus Drive in Kingston. According to the National Works Agency (NWA) it was to enhance traffic flow and “improve drainage infrastructure along the corridor”. In some sections the road was to be lifted by three feet (one metre).

Last week, as happens almost anytime there is anything beyond a moderate shower, Marcus Garvey Drive turned into a river. Traffic choked. Government officials have said that the area needs major new drainage infrastructure – as if no one knew before the road’s redevelopment was done.

And there is the completed, not-yet-occupied, but, after Ian now-marooned, police station at Green Acres, St Catherine. The station was built in a flood-prone area. Planners and engineers ought to have been aware. Residents were.

A drainage system for the area will cost more than the station itself. We might have been happy if that was all.

Common sense is the handmaiden of good policymaking.