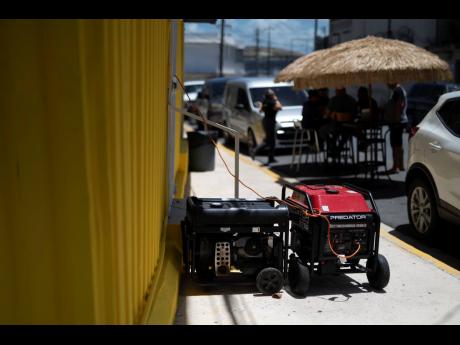 AP
AP Business owners turn to their power generators in San Juan, Puerto Rico, to be able to keep working during an islandwide blackout on April 7.

A heavily criticised private company that operates the transmission and distribution of power in Puerto Rico secured a last-minute extension on its contract on Wednesday, despite widespread objections.

Luma Energy obtained the extension following a 4 to 1 vote by the Puerto Rico Electric Power Authority’s board, with the sole dissenting vote cast by a member representing the public’s interest. Luma also will be paid some US$122 million next year, up from the US$115 million it has received so far.

The approval of the temporary contract comes amid worsening power outages that prompted the United States government to intervene this month and start securing barges and land-based generators to ease blackouts. Crews have started to rebuild the power grid that Hurricane Maria razed in September 2017, with only emergency repairs made until now.

Luma, a consortium made up of Calgary, Alberta-based Atco and Quanta Services Inc of Houston, was initially awarded the contract in June 2021, taking over crumbling infrastructure resulting from decades of neglect and mismanagement under Puerto Rico’s Electric Power Authority.

But the duration of outages has worsened under Luma, which has faced heavy scrutiny and calls for its contract to be cancelled by customers hit with several state-implemented electric rate increases in one year, while often left in the dark. Several substations have caught fire in recent months, with bad weather, sargassum — a type of seaweed — and even an iguana blamed for the outages, as well as ageing infrastructure further weakened by Hurricane Fiona, a Category 1 storm that struck Puerto Rico’s southwest region in September and caused an estimated US$4 billion in damage to the power grid.

In August, Governor Pedro Pierluisi criticised Luma publicly for the first time, saying he was not satisfied with its performance. But he has since said Luma is already working on projects to rebuild the grid and that finding a different company would further delay the work.

“Cancelling the contract makes no sense right now,” Pierluisi said during a news conference on Wednesday, adding, “We all want both Luma and the Electric Power Authority to improve their performance to have a more stable electric service.”

Luma celebrated the extension of its contract, saying that “despite an array of inherited challenges, Luma has made significant progress over the last 18 months addressing key infrastructure challenges, as well as improving the reliability and resiliency of the system”.

On Tuesday, the board of directors for Puerto Rico’s Public-Private Partnerships Authority voted to extend Luma’s contract in a 3 to 2 vote. The two board members who represent the public’s interest abstained.

“There is no room to look back,” he said.

Also backing Luma is a federal control board that oversees Puerto Rico’s finances. It issued a statement saying it’s aware of the debate surrounding Luma and that customers are entitled to demand improvements.

“However, decades of underinvestment, deferred maintenance, and lack of long-term planning by [Puerto Rico’s Electric Power Authority] resulted in one of the worst- performing and least reliable energy systems in the United States, with customers experiencing eight times more outages than customers of median US utilities, and such outages lasting 10 times longer,” the board said. “These fundamental deficiencies cannot be reasonably expected to be fully corrected within just 18 months of operations.”

Government officials warned that cancelling Luma’s contract could cost up to US$600 million, an amount Puerto Rico cannot afford since it just emerged from the biggest municipal bankruptcy in US history.

Luma’s contract is expected to remain in place until the bankruptcy of Puerto Rico’s power company, which holds some US$9 billion in debt, is resolved. It is the largest debt held by any local government agency.

Mediation talks to restructure its debt broke down earlier this year, with a federal judge in late September ordering a fresh round of talks and allowing the federal control board to go to court to determine how much money bondholders should receive.

If the judge approves a debt-restructuring plan for the power company, then a 15-year contract for Luma kicks in, and Luma would be subject to bonuses or penalties, depending on its performance.

Puerto Rico’s Electric Power Authority was to file a proposal to slash its debt by Thursday. It wasn’t immediately clear whether the deadline would had been met.