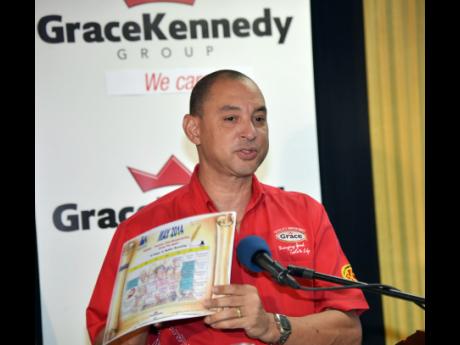 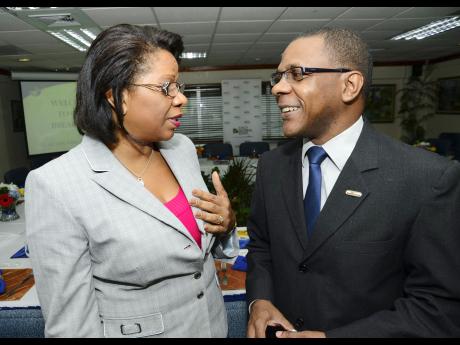 Rudolph Brown
Maureen Hayden-Cater and Courtney Campbell are seen here at a corporate breakfast at GraceKennedy's head office on November 9, 2012. Campbell will be taking over Hayden-Cater's job as CEO of First Global Bank next month.
1
2

"As with other risk officers in the group, at the group level, the GKFG AVP risk & compliance officer will also have a dotted-line reporting relationship to the Group Chief Risk Officer Cathrine Kennedy, who will report to the Group Chief Financial Officer Frank James," GK stated in

the release announcing the restructuring.

The managing director of GK Capital Management, Steven Whittingham, will now report to Wehby in his role as GK Capital's board chairman.

Within the food segment, Wehby said that with the July 2014 acquisition of the La Fe Foods business in the United States, and its importance to the group's strategic objectives, Michael Ranglin has been seconded to the US as CEO of the newly created segment, GraceKennedy Foods-North America and CEO/President of GraceKennedy Foods (USA) LLC.

Ryan Mack will be appointed CEO of GraceKennedy Foods-Jamaica (Domestic), Caribbean and International East, which is also a newly created segment.

Meanwhile, all senior general managers in Jamaica - Gilroy Graham, Andrea Coy and Andrew Ho - will report to Mack. As a result of this structural change, Mack will report directly to Wehby as Group CEO.

"I am confident that these changes will allow us to focus on the implementation of our group strategy towards regional and international expansion," the group boss said, while noting that 2015 has been identified as a year where the consumer and increased productivity would be key drivers of the company.

GraceKennedy also aims to reposition banking within the group.

Outlining his expectation of Campbell in his new role at First Global, Wehby said: "Banking is going to be core for the GraceKennedy Group. He is expected to, first of all, build a first class team in the bank. He is expected to grow the bank in terms of profitability and return on investments for GK shareholders.

"There are a number of innovations which he is expected to roll out, including agency banking, mobile wallet and a number of new products related to technology, which will be rolled out by the bank. As you know, Courtney has more than 25 years experience in commercial banking."

In addition to growing the bank, Campbell, in his role as CEO of GKFG, will remain in charge of GraceKennedy Money Services, whose managing director, Michelle Allen, will continue to report to him.

All the changes together, Wehby said, are expected to synchronise with the company's aim to become a global consumer group, under which the conglomerate has set a target of 15 per cent of total revenue from each of three continents in which the company has operations.

"The changes are in keeping with our efforts to optimise the structure of the group, making it more efficient and simple, with less duplication of effort. This is also an important way of ensuring that our Senior Leadership is out there in the business units and that our organisation is as nimble as possible," Wehby said in the company release that announced the changes.

The GK Group CEO told the Financial Gleaner that costs associated with the restructuring are yet to be finalised. As to the projections for saving from the effort, he said this is yet to be determined.

"Obviously, it is going to be good; we are going to have some good savings," he said confidently.

The GraceKennedy conglomerate is currently worth $78 billion by revenues. Its assets total $102 billion. Food and retail accounted for 79 per cent of revenues and 24 per cent of profit last year. The group earned 57 per cent of revenue domestically in 2014, compared to 64 per cent the previous year.

Profits were flat for the year at $3.8 billion.