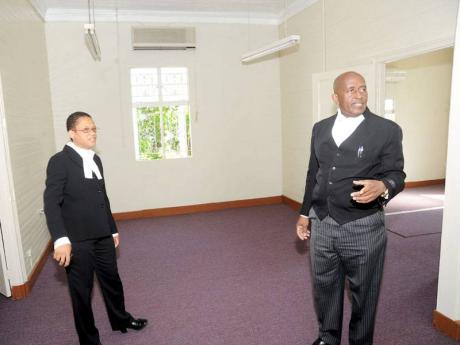 Attorneys Linton Gordon (right) and Stacey Mitchell inside what was the office of national hero Norman Washington Manley at 21-23 Duke Street. 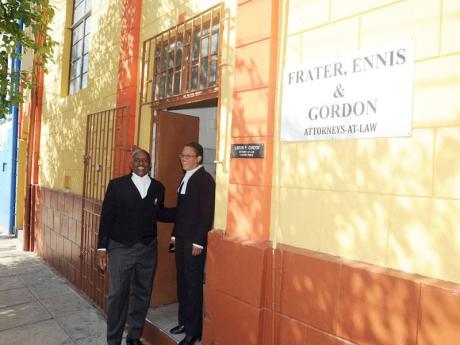 THE PREMISES at 21 Duke Street in downtown Kingston were once the office of the internationally renowned attorney-at-law Norman Washington Manley.

It is now the home of the law firm Frater, Ennis & Gordon and a recent multimillion-dollar refurbishing has left the building looking fit to house Manley, the former head of Government who is numbered among the country's national heroes.

Attorney-at-law Linton Gordon, through his company Tribe Gordon, spent some $11 million to give the premises a new look, which he said underscores his commitment to downtown Kingston.

The premises have been his operating base since 1981 when he was called to the Bar and Gordon has no plan to move.

"Downtown for attorneys will continue to be the ultimate," Gordon told The Gleaner.

"I walk to the Court of Appeal in four minutes and to the Supreme Court in three minutes. My staff can get to the Stamp office in five minutes and the Registrar of Titles is close by," added Gordon as he pointed to other entities such as the Registrar General's Department, the tax office, and the Administrator General's Department, which have bases in downtown Kingston.

"There are also several banks and other entities, which we do business with, which are close by."

For Gordon and his team, including 'colour consultant' attorney-at-law Stacey Mitchell, there is nothing uptown that could attract them to move out of downtown Kingston.

"Its a matter of choice. Persons may go uptown for whatever reasons, but I believe in the long run more and more attorneys will locate downtown because of the convenience."