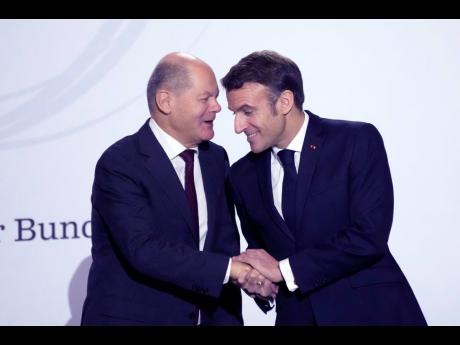 Christophe Ena
French President Emmanuel Macron (right), shakes hands with German Chancellor Olaf Scholz at the Sorbonne University during a ceremony to mark 60 years since a landmark treaty sealed a bond between the longtime enemies on Sunday.

France and Germany committed Sunday to giving Ukraine “unwavering support” and to strengthening the European Union as they sought to overcome differences over defense, energy, and economic issues on the 60th anniversary of their post-World War II friendship treaty.

The German government’s entire Cabinet was in Paris for joint meetings with their French counterparts, and about 300 lawmakers from the two countries came together at the Sorbonne University during the day of ceremonies and talks.

The war in Ukraine has exposed differences in strategy between the two countries, notably in European talks on how to deal with the resulting energy crisis and punishing inflation as well as over future military investments.

Both countries have contributed significant weaponry to Ukraine, but Ukraine is asking for tanks and more powerful arms as Russia’s war drags on. Germany is under pressure to approve the transfer of Leopard 2 battle tanks, which are made in the country.

Speaking during a joint news conference with German Chancellor Olaf Scholz, French President Emmanuel Macron said he did not rule out sending Leclerc tanks to Ukraine and had asked his defense minister to “work on” the idea.

Scholz did not comment on whether Germany would agree to provide the Leopards, instead stressing what his country had already supplied.

“The US is doing a lot. Germany is doing a lot, too,” the chancellor said. “We have constantly expanded our deliveries with very effective weapons that are already available today. And we have always coordinated all these decisions closely with our important allies and friends.”

In a joint declaration, the two countries said they that would “continue to show unwavering support to Ukraine in all areas possible” and would “stand with Ukraine for as long as it takes”.

France and Germany also pledged to “work together for a European Union that is more resilient, more sustainable, and more capable to act independently”. The treaty that sealed a bond between longtime enemies France and Germany 60 years ago underpinned today’s EU.

“Let us use our inseparable friendship ... to shape the present and future of our continent, together with our European partners,” Scholz said at the ceremony at the Sorbonne.

Scholz said Russian President Vladimir Putin’s “imperialism will not win. ... We will not allow Europe to revert to a time when violence replaced politics and our continent was torn apart by hatred and national rivalries,” he added.

Macron called for “a new energy model” in the EU based on diversifying supplies and encouraging carbon-free energy production.

In their joint declaration, Paris and Berlin committed to “stepping up our investments in the technologies of tomorrow, particularly renewable and low carbon energies.” They especially committed to develop a “joint road map” on hydrogen.

They said a joint pipeline project by Spain, France, and Portugal to transport green hydrogen — produced from renewable sources is to be extended to Germany.

The so-called H2Med undersea pipeline from the Iberian peninsula to France is set to enter operation by 2030. It is expected to transport up to two million metric tons of green hydrogen a year, which amounts to 10 per cent of the total European Union’s consumption, according to Spanish authorities.