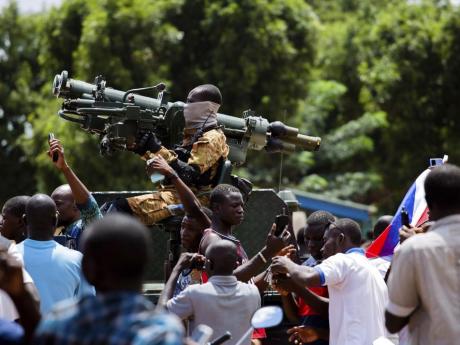 Soldiers loyal to Captain Ibrahim Traore are cheered in the streets of Ouagadougou, Burkina Faso, Sunday, October 2, 2022. Burkina Faso's new junta leadership is calling for calm after the French Embassy and other buildings were attacked. (AP Photo/Kilaye Bationo)

OUAGADOUGOU, Burkina Faso (AP) — Burkina Faso's ousted coup leader Lieutenant Colonel Paul Henri Sandaogo Damiba left the country for Togo Sunday two days after he himself was overthrown in a coup, while the new junta urged citizens not to loot or vandalise.

Damiba's departure was confirmed by two diplomats who spoke to The Associated Press on condition of anonymity due to the sensitivity of the matter.

It was not known whether Togo was his final destination.

Earlier Sunday, religious leaders who had mediated between the factions said that Damiba had offered his resignation as long as his security and other conditions were met.

A junta representative later announced on state television that their leader, Capt. Ibrahim Traore, officially has been named head of state following the Friday coup that ousted Damiba.

Their power grab marked Burkina Faso's second military coup this year, deepening fears that the political chaos could divert attention from an Islamic insurgency whose violence has killed thousands and forced 2 million to flee their homes.

It followed unrest in Ouagadougou, the capital, in which mobs on Saturday attacked the French embassy and other French-related sites, wrongly believing that they were sheltering Damiba.

Along with agreeing not to harm or prosecute him, Damiba also asked Traore and the new junta leadership to respect the commitments already made to the West African regional bloc ECOWAS. Damiba, who came to power in a coup last January, had recently reached an agreement to hold an election by 2024.

In a statement late Sunday, ECOWAS said it would be sending a team of mediators to Ouagadougou on Monday including former Niger President Mahamadou Issoufou.

The ECOWAS statement, signed by Guinea-Bissau President Umaro Sissoco Embalo, noted that Damiba had resigned “in order to avoid a violent confrontation and possible bloodshed.”

Earlier in the day, the new junta leadership had called for an end to the unrest that engulfed Ouagadouou in wake of Friday night's coup.