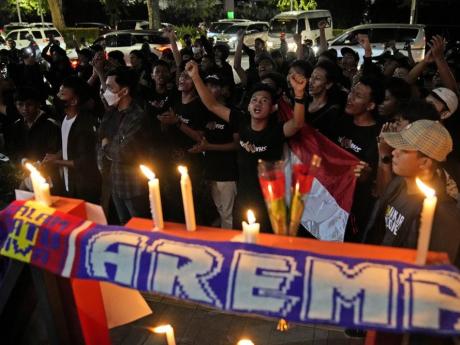 Football fans chant slogans during a candle light vigil for Arema FC supporters who became victims of Saturday's football riots, outside the Youth and Sports Ministry in Jakarta, Indonesia, Sunday, October 2, 2022. Panic and a chaotic run for exits after police fired tear gas at a soccer match between Arema FC and Persebaya in East Java to drive away fans upset with their team's loss left a large number of people dead, most of whom were trampled upon or suffocated. (AP Photo/Dita Alangkara)

MADRID (AP) — A minute of silence was observed before football matches around the world on Sunday in honour of victims of the disaster at a stadium in Indonesia that claimed at least 125 lives, and top players, coaches and leagues sent condolences and messages of support.

Most of the victims were trampled upon or suffocated as chaos erupted following a game between host Arema FC of East Java's Malang city and Persebaya Surabaya on Saturday night.

Witnesses described police officers beating fans with sticks and shields before shooting tear gas canisters directly into the crowds to stop violence but instead triggering a deadly crush.

Indonesia's football association suspended the top-tier Liga 1 indefinitely and banned Arema from hosting soccer matches for the remainder of the season, after one of the biggest tragedies globally at a sporting event.

Soccer leagues observing a minute of silence in honour of victims included Spain, Israel and the Netherlands.

“Terrible. Absolutely terrible. The world is crazy,” he said.

“The best thoughts for the family and everything.”

Manchester United coach Ten Hag said it was “really a disaster ... We are sad about it and our thoughts are with all the persons and the families and people of Indonesia.”

Some fans reacted to the news before kickoff in Manchester.

“We've been going to games for 50-odd years,” said Ray Booth, a Man City fan. “We don't think about these things, but it could quite easily happen. You have a panic with thousands of people all together. It could happen. It is frightening to think about.”

Both Manchester clubs said they were “deeply saddened” by the tragedy in Indonesia.

“We send our sincere condolences to the victims, their families, and everyone affected,” Man United said.

In Spain, Real Madrid president Florentino Perez called for a minute of silence during the club's general assembly.

Barcelona said it was “pained by the tragic events” and rejected “all acts of violence both on and off the field.” Ajax said “there should never be violence at a football match.”

In a statement, FIFA President Gianni Infantino offered condolences on behalf of the global soccer community, saying “the football world is in a state of shock.”

FIFA did not mention in its statement the under-20 World Cup that Indonesia is set to host next year.