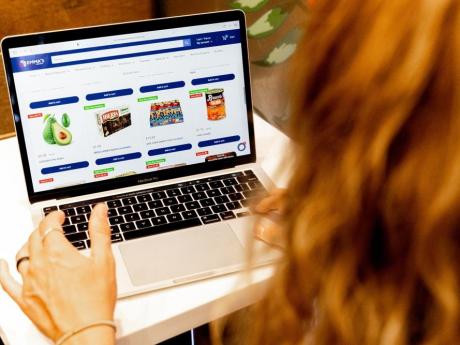 Caroline Hansen uses Emma's Premium Services, a higher-priced service according to Hansen, to shop for food for her husband, Thursday, August 11, 2022, in New York. Hansen used to hand-deliver two packages containing fresh food, meats, and vegetables a month to her husband, who is serving life without parole at Sullivan Correctional Facility for murder, but now has to send him packages containing food and other essentials through a third-party vendor. (AP Photo/Julia Nikhinson)

ALBANY, N.Y. (AP) — As part of an effort to keep illegal drugs and other contraband out of state prisons, New York is taking away one of the few pleasures of life behind bars: It will no longer let people send inmates care packages from home.

Under the new policy, which the state began phasing in last month, friends and family aren't allowed to deliver packages in person during prison visits.

They also won't be allowed to mail boxes of goodies unless those come directly from third-party vendors.

While the rule won't stop prisoners from getting items that can be ordered online, like a Snickers bar or a bag of Doritos, they will lose access to foods like home-cooked meals or grandma's cookies.

That's a letdown for people like Caroline Hansen, who for 10 years hand-delivered packages filled with fresh vegetables, fruits, and meats to her husband, who is serving a life sentence.

“When I first started bringing him packages, he said he loved avocados. He hadn't had them in about 20 years,” said Hansen, a single mother of two who works as a waitress in Long Island.

“What breaks my heart is, I take for granted having a banana with my yogurt. Imagine never being able to eat a banana?” she added, saying her husband's prison cafeteria serves bananas once a month, at most.

New York had been one of the few states in the nation that still allowed families to send packages to inmates from home. The rule is already in effect in a majority of state prisons.

Starting this month, the state prison system is also testing a program where inmates will be blocked from getting most letters sent on paper. Instead, incoming letters will be scanned by computer, and prisoners will get copies.