Mexico president to bypass congress to keep army in streets 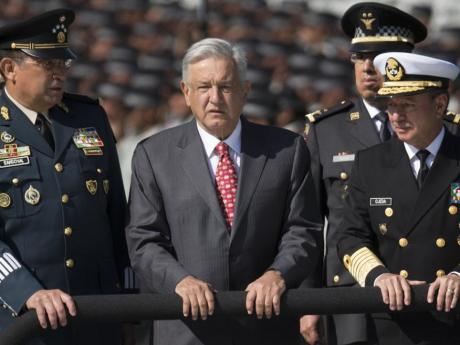 MEXICO CITY (AP) — Mexico's president has begun exploring plans to sidestep congress to hand formal control of the National Guard to the army, a move that could extend the military's control over policing in a country with high levels of violence.

That has raised concerns because President Andrés Manuel López Obrador won approval for creating the force in 2019 by pledging in the constitution that it would be under nominal civilian control and that the army would be off the streets by 2024.

Neither the National Guard nor the military has been able to lower the insecurity in the country, however.

This past week, drug cartels staged widespread arson and shooting attacks, terrifying civilians in three main northwest cities in a bold challenge to the state.

Still, López Obrador wants to keep soldiers involved in policing, and remove civilian control over the National Guard, whose officers and commanders are mostly soldiers, with military training and pay grades.

But the president no longer has the votes in congress to amend the constitution and has suggested he may try to do it as a regulatory change with a simple majority in congress or by an executive order and see if the courts will uphold that.

López Obrador warned Friday against politicising the issue, saying the military is needed to fight Mexico's violent drug cartels. But then he immediately politicised it himself.

“A constitutional reform would be ideal, but we have to look for ways, because they (the opposition) instead of helping us, are blocking us, there is an intent to prevent us from doing anything,” López Obrador said.

The two main opposition parties also had different positions when they were in power. They supported the army in public safety roles during their respective administrations beginning in 2006 and 2012.