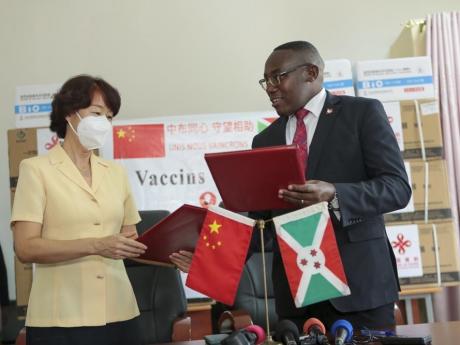 Burundi's Minister of Health Dr Thaddee Ndikumana (right) and China's ambassador to Burundi Zhao Jiangping attend a ceremony to mark the arrival of the first COVID-19 vaccines to the country, in Bujumbura, Burundi, Thursday, October 14, 2021. The arrival of the shipment of Sinopharm vaccine from China marked the end of the country's status as one of the last few in the world to have adopted coronavirus vaccines. (AP Photo/Berthier Mugiraneza)

NAIROBI, Kenya (AP) — One of the world's last three countries to administer COVID-19 vaccines started giving out doses on Monday as the East African nation of Burundi launched its national campaign.

The vaccinations started in the commercial capital, Bujumbura, though health workers told The Associated Press that barely more than a dozen people had received doses by mid-afternoon. Recipients included the ministers of health and security.

Only North Korea and the Horn of Africa nation of Eritrea have not administered any COVID-19 vaccines, according to the World Health Organization.

Burundi's previous government under the late President Pierre Nkurunziza had been criticised for taking the pandemic lightly.

The vaccination campaign began after Burundi received a half-million doses of the Sinopharm vaccine.

But hesitation remains among some officials.

On Sunday, Prime Minister Alain Guillaume Bunyoni asserted, without evidence, that the government has the responsibility to tell citizens that “the vaccine has a lot of consequences not even known by the specialists who created the vaccine.”