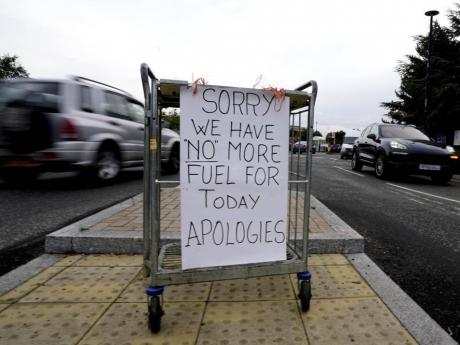 A sign referring to the lack of fuel is placed at the entrance to a petrol station in London, Tuesday, September 28, 2021. Long lines of vehicles have formed at many gas stations around Britain since Friday, causing spillover traffic jams on busy roads. (AP Photo/Frank Augstein)

LONDON (AP) — Britain's transport minister said Tuesday there are “tentative signs” a fuel-supply crisis snarling the country is easing, but it will be a while before the situation returns to normal.

The government has put army troops on standby to help get gas to stations and help ease a fuel drought triggered by a shortage of truck drivers.

“There are now the first very tentative signs of stabilisation in forecourt storage which won't be reflected in the queues as yet,” Transport Secretary Grant Shapps said.

“But it is the first time that we have seen more petrol actually in the petrol stations.

Many gas stations around Britain have had to shut in the past five days because they have run out of fuel.

Long lines of vehicles have formed at pumps that are open, with tempers fraying amid hourslong waits.

The crisis has brought calls from health care organisations and teachers' groups for essential workers to be given priority for fuel supplies.

“We can't be waiting two or three hours in a queue for fuel when we have patients to see,” David Wrigley, deputy chairman of the British Medical Association, told Times Radio.

Geoff Barton, general secretary of the Association of School and College Leaders, said the crisis was so far causing worry, but not major disruption, for educators who are already grappling with the effects of the coronavirus pandemic.

“We very much hope the situation is resolved rapidly before it causes disruption,” he said.

“There is the option for remote education, which schools and colleges have shown themselves to be very adept at providing through the pandemic, but this is very much a last resort and they will be hoping it doesn't come to that.”

The supply problems stem from a shortage of as many as 100,000 truck drivers, due to a perfect storm of factors including pandemic-related disruption to driver training, an ageing workforce and an exodus of foreign workers following Britain's departure from the European Union last year.

Post-Brexit immigration rules mean EU citizens can no longer live and work visa-free in Britain, as they could when the UK was a member of the bloc.

The British government has put army tanker drivers on standby to deliver fuel if needed and has said it will issue 5,000 short-term visas to foreign truck drivers to help ease the crisis in the run-up to Christmas.