As COVID-19 surges, oxygen is in short supply 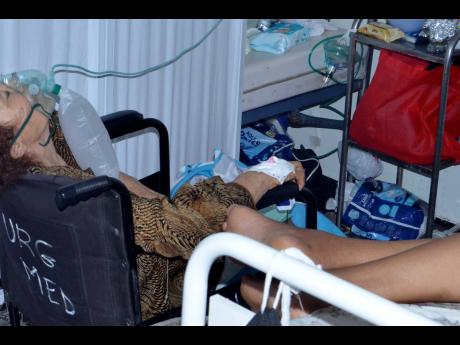 Aimen Othmani
In this June 28 file photo, a COVID-19 patient breathes with the help of an oxygen mask at the Iben El Jazzar Hospital in Kairouan, Tunisia.

As Tunisia faces a surge of COVID-19 cases, demand for life-saving oxygen has grown higher than the supply, leaving patients desperate and family members angry at the government, as they say they are forced to find oxygen on their own.

As the misery grows, traders have seized on an opportunity for profit, buying supplies of oxygen and other treatments and then renting them or selling them at higher prices. The profitable enterprise that is growing online has prompted citizens to call on the authorities for intervention.

“I was subjected to various types of blackmailing. People were trading and brokering with everything. Believe me, with everything,” said Abdou Mzoughi, 43, whose nearly 80-year-old mother died on June 26 from COVID-19 after he spent six days trying, but failing, to get the life-saving oxygen treatment she needed.

“We were looking for a bed with oxygen in any hospital,” he said. He couldn’t even find her a place in a field hospital, or obtain a larger oxygen concentrator for at-home treatment.

The pandemic comes as the nation in North Africa – the only success story of the Arab Spring of a decade ago – finds itself beset by overlapping political and economic crises. Last month, President Kais Saied fired the prime minister, froze the parliament and took on executive powers in what he says is a bid to save the country. He began ruling by decree after nationwide protests over the nation’s deteriorating social and economic situation – topped by the raging coronavirus epidemic.

Tunisia, with a population of 12 million, has reported more deaths per capita in the pandemic than any African country and has had among the highest daily death rates per capita in the world in recent weeks. More than 20,000 Tunisians have died so far, and the vaccination rate remains low.

Mzoughi said the market price of oxygen has more than doubled as demand grows in Kairouan, an ancient desert city that is considered among the holiest in Islam and is recognised by UNESCO for its rich architectural heritage. It is also one of the poorest cities in Tunisia.

Renting an oxygen concentrator can now cost up to US$200 a week – an amount that Mzoughi roughly makes in a month with a steady job in the regional office of an online newspaper.

Now he visits his mother’s grave daily and describes still being in a state of shock over her death.

Ahmed Jridi, who owns a shop in Kairouan selling medical devices, said he has seen more sales in oxygen devices.

“I discovered that those who are renting these devices do not have sick people who need oxygen, but rather they are merchants, and when they knew that it was a profitable business, they bought many oxygen devices and began to control the high rental price,” he said.

Private hospitals and clinics are also witnessing unprecedented pressure and intense demand for resuscitation and oxygen beds. That has caused a shortage of liquid oxygen in hospital tanks, and prompted the health authorities to request supplies from Algeria to enhance its strategic stock and avoid interruption in health units.

It has also led to the use of spare oxygen bottles, or the transfer of some patients to other hospitals.

“The oxygen is exhausted. The reserve in the cistern is only used for a few minutes. So to protect our patients, we have prepared large bottles of oxygen between the beds of patients who are in artificial respiration,” said Dr Kaies Traoui, a resident in the department of anaesthesia and resuscitation at Aghlabid Hospital in Kairouan.

Authorities have now ordered private clinics to contribute oxygen until there is a return to the normal oxygen supply pattern.

An especially moving video posted in mid-July on social media showed a man described as an official of Mateur Hospital, in the north, collapsing in tears because there was no oxygen for his patients. The video, posted by a Tunisian journalist, made the rounds at home and was widely picked up by French media.

However, the ministry denies claims that the health system in Tunisia is collapsing, saying it has received adequate aid from Arab and European countries, including oxygen machines, vaccines and field hospitals.

Still, on July 21, President Saied ordered the military to take over the management of the national response to the pandemic.

The United States, France, Italy and China are among countries who recently supplied millions of doses of vaccines, and France opened a “maritime bridge” less than two weeks ago for the French Navy to bring in medical oxygen and other health equipment.

The representative for the World Health Organization in Tunis, Yves Souteyrand, said on Monday there were “positive signs” the virus crisis was easing, with a recent decline in positive test rates, from 35 per cent to 24 per cent, the official TAP news agency reported.