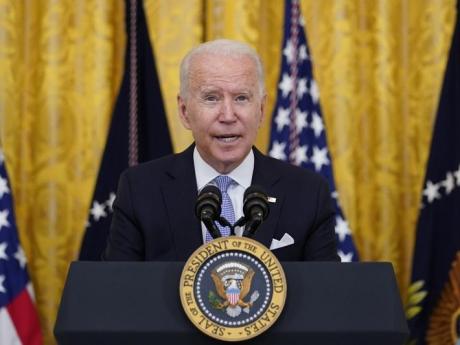 President Joe Biden announces from the East Room of the White House in Washington, Thursday, July 29, 2021, that millions of federal workers must show proof they've received a coronavirus vaccine or submit to regular testing and stringent social distancing, masking and travel restrictions in an order to combat the spread of the coronavirus. (AP Photo/Susan Walsh)

WASHINGTON (AP) — The Biden administration announced new sanctions on Friday against Cuba's national revolutionary police and its top two officials as the US looks to increase pressure on the communist government following this month's protests on the island.

The Police Nacional Revolcionaria and the agency's director and deputy director, Oscar Callejas Valcarce and Eddie Sierra Arias, were all targeted in the latest sanctions announced by the Treasury Department's Office of Foreign Assets Control.

The police are part of Cuba's interior ministry, which was already the subject of a blanket designation by the Trump administration back in January.

“The Treasury Department will continue to designate and call out by name those who facilitate the Cuban regime's involvement in serious human rights abuse,” said Andrea Gacki, director of the Office of Foreign Assets Control.

“Today's action serves to further hold accountable those responsible for suppressing the Cuban people's calls for freedom and respect for human rights.”

The sanctions were announced as President Joe Biden was set to meet on Friday afternoon with Cuban American leaders to discuss the situation on the island.

The administration says it is considering a wide range of additional options in response to the protests, including providing Internet access to Cubans, and has created a working group to review US remittance policy to ensure that more of the money that Cuban Americans send home makes it directly into the hands of their families without the government taking a cut.

The White House meeting comes almost three weeks after unusual July 11 protests in which thousands of Cubans took to the streets in Havana and other cities to protest shortages, power outages and government policies. They were the first such protests since the 1990s.

The Cuban regime deployed the PNR to attack protesters, the Treasury Department said in a statement.

The police were photographed confronting and arresting protesters in Havana, including members of the Movement of July 11 Mothers, a group founded to organise families of the imprisoned and disappeared, according to Treasury.

The White House did not provide more details of the meeting, only saying that new sanctions will be discussed as well as ways to establish Internet access for the Cuban people.