Southeast Europe heat wave set to be among worst in decades 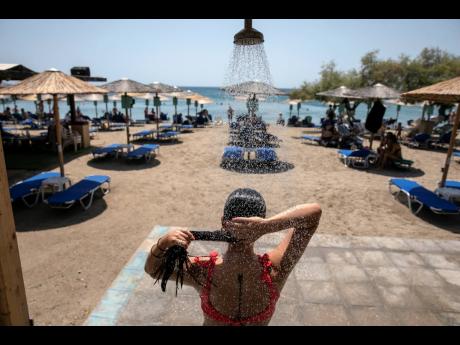 Yorgos Karahalis
A woman takes a shower at a beach of Lagonissi village, a few miles southwest of Athens, on Thursday.

A heat wave scorched southeast Europe on Thursday, intensifying wildfires and sending residents flocking to the coast, public fountains and air-conditioned locations to find some relief.

Temperatures rose above 40C (104F) in parts of Greece and across much of the region. Weather experts in Athens said they expected the heat wave to extend into next week, making it one of the most severe recorded in the country since the mid-1980s.

At least three people were killed in southern Turkey and dozens of people were hospitalised as the intense summer heat and strong winds fanned two separate forest fires.

Wildfires in Greece threatened homes for a third successive day, with a blaze reported Thursday outside the western city of Patras.

“The ongoing heat wave is a dangerous weather phenomenon, as it will last until the end of next week with a small temperature range between maximum and minimum levels,” said Theodoris Kolydas, director of Greece’s National Meteorological Service.

Cooling shelters were set up in the Greek capital, but access to the air-conditioned public spaces was limited by pandemic restrictions.

Authorities in Serbia, Bulgaria, Bosnia and Herzegovina and other affected countries advised people to avoid exposure to direct sunlight in midday hours.

In North Macedonia, pregnant women and people over age 60 were excused from work until the end of the week, while construction companies were ordered to stop work from 11 a.m. to 5 p.m.

Climate experts argue that extreme weather like the recent deadly floods in Germany and heat waves in Canada and the western United States are likely to become more frequent as rising global temperatures create greater instability.

“When you see observations like that, they are taking us outside our own envelope of experience of what we have seen before. An event like that is simply not possible to explain without the human influence on the climate system.”

According to the UN World Meteorological Organization, 2020 was one of the three warmest years on record globally. It was the warmest year on record for Europe.