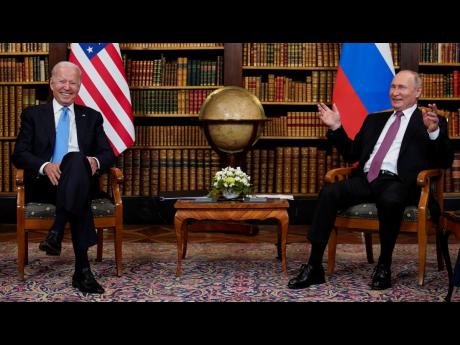 Russian President Vladimir Putin on Thursday praised the outcome of his summit with US President Joe Biden and called him a shrewd negotiator.

The two leaders concluded three hours of talks on Wednesday at an opulent villa facing Lake Geneva by exchanging expressions of mutual respect, but firmly restating their starkly different views on cyberattacks, the conflict in Ukraine, political dissent and other issues. At the same time, they announced an agreement to return each other’s ambassadors and mapped more talks on arms control and cybersecurity.

Putin, who hailed Biden as a highly experienced and constructive interlocutor at a news conference in Geneva, offered more praise of the US leader on Thursday in a video call with graduates of a government management school.

Biden kept him on his guard with his savvy negotiating skills, Putin said.

“He perfectly knows the matter,” Putin said. “He is fully concentrated and knows what he wants to achieve. And he does it very shrewdly.”

He dismissed what he described as media attempts to cast Biden as physically frail, noting that the 78-year-old US president was in great shape even though the meeting wrapped up a European tour for him that included the G7 and NATO summits.

“He was on a long trip, he flew in from across the ocean, involving jet lag,” the 68-year-old Putin said, adding that he knows how tiring travel can be.

Putin particularly emphasised the importance of an agreement to conduct dialogue on cybersecurity between experts, saying it would help reduce tensions.

Biden said he and Putin agreed to have their experts work out an understanding about what types of critical infrastructure would be off limits to cyberattacks. The agreement follows a flood of ransomware attacks against US businesses and government agencies that US officials said originated from Russia.

Putin, who has strongly denied any Russian state role in the cyberattacks, argued on Thursday that “instead of finger-pointing and bickering, we should better combine efforts to fight cybercrime”.

Putin’s spokesman, Dmitry Peskov, described the summit as positive and productive, saying it allowed the leaders “to directly put forward their positions and try to understand where interaction is possible, and where there can be no interaction due to categorical disagreements”.