Johnson ‘anxious’ over rise of Indian coronavirus variant in UK 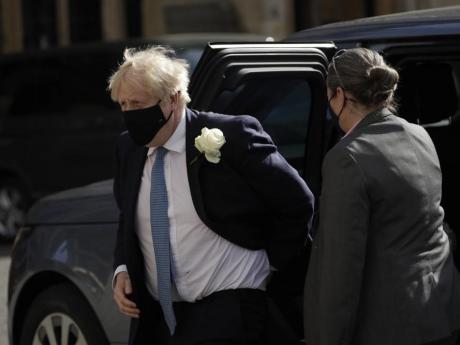 British Prime Minister Boris Johnson arrives to attend an annual service for the Florence Nightingale Foundation to mark nurses' contribution to the community at Westminster Abbey in London, Wednesday, May 12, 2021. (AP Photo/Matt Dunham)

LONDON (AP) — British Prime Minister Boris Johnson said Thursday he was “anxious” about a rise in the UK of the coronavirus variant first identified in India after a closely monitored study of infections in England found the variant is becoming more prevalent just ahead of the next big easing of lockdown restrictions.

“It is a variant of concern, we are anxious about it,” Johnson said.

“We want to make sure we take all the prudential, cautious steps now that we could take, so there are meetings going on today to consider exactly what we need to do. There is a range of things we could do, we are ruling nothing out.”

In its latest assessment published Thursday, Imperial College London said overall cases have fallen to their lowest level since August following a strict lockdown and a successful rollout of vaccines.

However, it warned that the Indian variant should be closely monitored.

The so-called REACT study found that the Indian variant, designated “of concern” because it could be more transmissible, was identified in 7.7% of the 127,000 cases tested between April 15 and May 3.

Professor Steven Riley from Imperial College said it's unclear whether the Indian variant is more transmissible but warned that “this is a risk.”

Though the British government and scientists have said new cases may start to go up in coming weeks, it's unclear whether that will lead to a big increase in hospitalisations and deaths given that most of those people deemed vulnerable have been vaccinated.

Over the past few weeks, as India has suffered a catastrophic resurgence of the virus, concerns have grown around the world about potential new variants bypassing the protections offered by vaccines.

Across the UK, lockdown restrictions are being lifted.

The next easing in England is set to take place on Monday when two households will be able to mix indoors and pubs and restaurants will be able to serve customers inside, among other changes.

The other nations of the UK — Scotland, Wales, and Northern Ireland — have also laid out similar plans for the coming weeks.

The government hopes to lift most remaining restrictions on social contact in June.