Money to support Trump court fight could flow to president 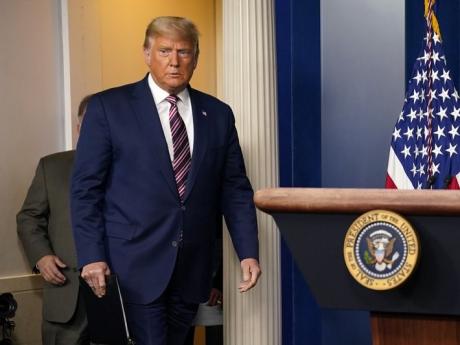 WASHINGTON (AP) — As President Donald Trump’s chances of reelection dwindled last week, his campaign began blasting out a nonstop stream of emails and text messages that led to a website raising money for an “election defence fund” to contest the outcome.

Like many hallmarks of the Trump presidency, the messages contained all-caps lettering and blatant mistruths about voter fraud during the November 3 election.

They also mislead supporters about where the money would go.

But the fine print indicates much of the money donated to support that effort since Election Day has instead paid down campaign debt, replenished the Republican National Committee and, more recently, helped get Save America, a new political action committee Trump founded, off the ground.

The unusual way the Trump campaign is divvying up the contributions has drawn scrutiny from election watchdogs, who say Trump and his family are poised to financially benefit from the arrangement.

“This is a slush fund. That’s the bottom line,” said Paul S. Ryan, a longtime campaign finance attorney with the good government group Common Cause.

“Trump may just continue to string out this meritless litigation in order to fleece his own supporters of their money and use it in the coming years to pad his own lifestyle while teasing a 2024 candidacy.”

The Democratic National Committee and Biden’s campaign are also raising money for a legal fight over the outcome of the election.

Most of the money is for the DNC’s legal account, though some of it will be routed to the party’s general fund, which doesn’t face the same spending restrictions.

It could then be used to pay for ads, for example, if Republicans try to get ballots tossed out with minor — and correctible — errors, according to a DNC official.