Opposition renews calls for Moise to step down 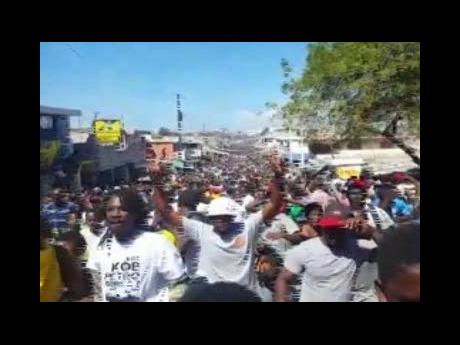 Opposition politicians on Monday said that they have no intention of collaborating with President Jovenel Moise as they staged protest demonstrations in the capital of the French-speaking Caribbean Community (CARICOM) country over the weekend, calling for him to step down.

The demonstrations coincided with the 214th anniversary of the October 17, 1806, assassination of Jean-Jacques Dessalines, which Moise used to reiterate earlier calls for unity and the need for all parties to come together to ensure a brighter socio-economic future for the country.

“I laid down a wreath at the Haitian National Pantheon Museum to honour the memory of Jean-Jacques Dessalines, the founding Father of our Homeland, an act that renews our faith in the legacy he bequeathed to us.

“Haiti needs tolerance, peace, and stability. In this circumstance, let us join forces, let us forget our quarrels,” Moise added, urging closer collaboration “in order to guarantee a better country for future generations”.

“The failure to resolve our political differences resulted in the assassination of the founder of our homeland, resulting in a divided country. Today, the past invites us to act differently to resolve our differences. This is the best tribute to Emperor Dessalines.”

Moise stayed away from Pont-Rouge, the site of the Dessalines assassination, so as not to provoke the opposition parties that had declared last Saturday a day of general anti-government mobilisation to demand his resignation.

But several opposition leaders, including André Michel, leader of the so-called “democratic and popular” movement, who participated in the weekend protests, told reporters, “we are on the way to the transition”.

“There will be no elections with Jovenel Moïse in power or cohabitation. His constitutional mandate ends on February 7, 2021,” he added

Michel said that Moïse would do better to pack his bags and leave the National Palace, adding, “his term will end in three months, but the people will not wait three months to demand his departure”.