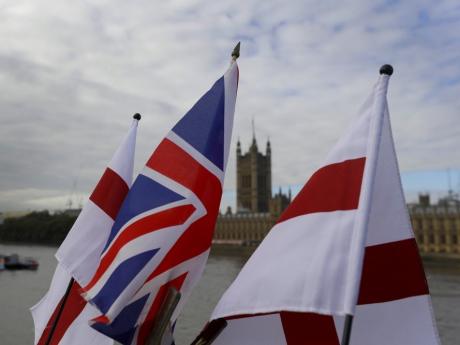 English flags and a Union flag fly above a souvenir stand opposite Britain's Parliament in London, Friday, October 16, 2020. Britain’s foreign minister says there are only narrow differences remaining in trade talks between the UK and the European Union. But Dominic Raab insists the bloc must show more “flexibility” if it wants to make a deal. (AP Photo/Kirsty Wigglesworth)

LONDON (AP) — Britain and the European Union edged toward resuming their troubled trade talks on Monday, after the bloc’s chief negotiator said he was ready to “intensify” negotiations on the legal text of an agreement.

Britain’s chief Brexit minister hailed that as evidence of significant movement from the EU, three days after Prime Minister Boris Johnson declared that the talks were effectively over — a dramatic flourish many believe was intended to inject momentum into the stalled process.

Britain and the EU have been attempting to strike a new trade deal since the UK left the bloc on January 31.

Those talks ground to a halt last week, with each side calling for the other to compromise in order to secure a deal.

The EU said it was happy to keep talking, but Johnson said Friday that negotiations were over unless there was a “fundamental” shift from the bloc. He told British businesses to prepare for a no-deal economic break with the EU at the end of the year.

EU chief negotiator Michel Barnier, who spoke by phone Monday with U.K. counterpart David Frost, said “the EU remains available to intensify talks in London this week, on all subjects, and based on legal texts.”

“We now wait for the UK’s reaction,” he tweeted.

Michael Gove, the British minister in charge of preparing for Brexit, welcomed Barnier’s statement, which he called a “constructive move.”

But the British prime minister’s office said it wasn’t enough to resume talks, which could only happen if the bloc accepted “that movement needs to come from the EU side as well as the UK” Downing St. said the two sides would remain “in close touch.”

Meanwhile, the UK government’s plan to breach part of its legally binding divorce deal with the bloc which has angered EU leaders, faced strong opposition from politicians and religious leaders in the UK.