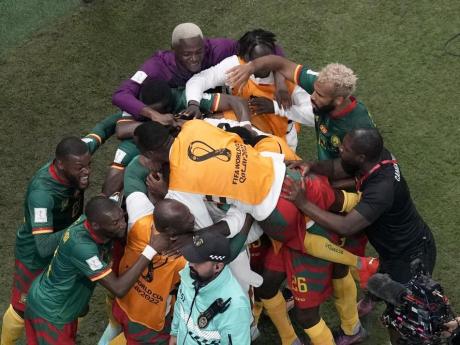 LUSAIL, Qatar (AP) — Vincent Aboubakar scored with a header two minutes into stoppage time in Cameroon's 1-0 win over Brazil at the World Cup on Friday, a result that still allowed the five-time champions to win the group and eliminated the Africans.

Aboubakar was then sent off with a second yellow card for taking off his shirt during his celebration.

Brazil, which had already reached the knockout stage after victories over Serbia and Switzerland, will face South Korea in the round of 16.

Brazil finished with six points, the same as Switzerland but the South Americans had a better goal difference.

The Swiss also advanced and will face Portugal.

Cameroon ended with four points and Serbia one.

Coach Tite rested nearly all of his regular starters and made 10 changes from the win against Switzerland on Monday.

Brazil was still without the injured Neymar, but the star forward was at Lusail Stadium to watch the match with his teammates.