Blake gambled against Messi and lost 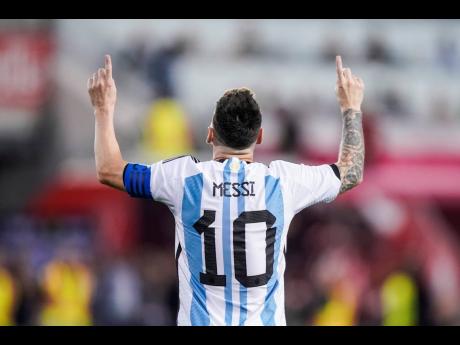 NEW JERSEY, United States: JAMAICA’S ANDRE Blake doesn’t normally bank on chance when doing his job as top goalkeeper for club and country. But, against Argentina last Tuesday, with arguably the world’s best player standing over a free kick just...

JAMAICA’S ANDRE Blake doesn’t normally bank on chance when doing his job as top goalkeeper for club and country.

But, against Argentina last Tuesday, with arguably the world’s best player standing over a free kick just outside his penalty area, the Reggae Boyz captain had a brief memory lapse and rolled the dice.

“I gambled,” Blake said with a post-match grin, shortly after Lionel Messi had curled his 89th minute shot past a scattering cluster of teammates, Jamaica’s wall and into the bottom corner of the net to seal Argentina’s 3-0 win in the friendly international here.

“And I end up on the wrong end because I think I forgot who was over the ball.”

Blake is well aware of Messi’s goalscoring potency, calling him “the best in the world”. The Argentina captain had given him a close-up preview only three minutes before, capping off a signature combination move to fire into the other corner.

Yet with Messi standing over the dead ball just 19 yards away, Blake, who plays for Major League Soccer (MLS) team Philadelphia Union not far from the packed and roaring Red Bull Arena, leaned to the side of Jamaica’s wall.

“By trying to be a little bit to my left, give myself a chance to make the save over the wall,” Blake explained. “I was in a good position. I was seeing the ball clearly.”

The multiple MLS goalkeeper of the year, who’s being touted as a possible league MVP in 2022, guessed wrong.

“I was full stretched and still wasn’t able to keep it out,” he said.

Blake was beaten – again – by Messi.

“This guy (Messi) can pick his spot and score a goal, you know,” Blake said.

His teammates were also left in awe.

“It’s just clear to see the quality for both finishes to beat a ‘keeper of Andre Blake’s quality, with the form that he’s in at the moment,” said defender Adrian Mariappa.

“It says everything about the calibre of player (Messi) is.”

Yet Blake isn’t upset about losing to Messi and Argentina.

“It was an amazing experience,” he said.

“(Argentina) is a world-class team. That’s the easiest way to put it. It’s a different ball game. The quality of play, the speed of play. Everything is a different level … . We learn from it and we move on.”

Argentina, not Jamaica, moves on to the World Cup starting next month. Messi, now 35, could join MLS before he retires, which could mean more encounters with Blake. Armed with his “little bit” of Spanish, Jamaican defender Damion Lowe, curious about Messi’s next club move, went directly to the source during a break in the game.

“I just asked (Messi), because you know there’s rumours of him coming down to the 305 (a telephone area code in South Florida where Lowe plays for MLS club Inter Miami),” he said. “… He just gave me a wink.”

Match statistics showed Blake saved two shots from Messi. He left with much more memories to “cherish” after their meeting and hopes Messi comes to the MLS so he can even the score a bit. He promised not to leave anything to chance then.

“Maybe that time I’ll get him back,” Blake said.

“I definitely look forward to playing him again and make sure I don’t gamble this time.”