Levell available for World Under-20 Champs 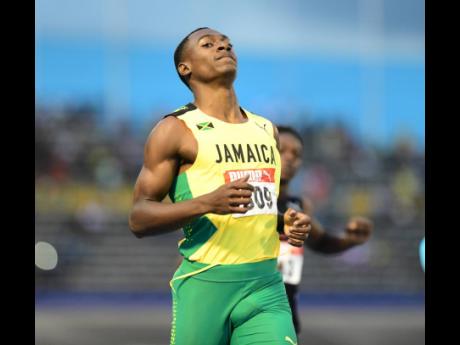 National junior sprint star Bryan Levell will now be considered for selection to Jamaica’s team to this year’s World Under-20 Championships after receiving a medical exemption for an injury he suffered almost a month before the JAAA’s National Junior and Senior Championships.

The World Under-20 Championships will be held in Cali, Colombia, from August 1-6.

Levell’s coach, Leon Powell, told The Gleaner that he applied for and received a medical exemption for Levell from the Jamaica Athletics Administrative Association (JAAA) as he was unable to compete at the National Championships due a hamstring injury.

Powell said Levell suffered the injury three weeks before the championships and was forced to miss the four-day event which was held at the National Stadium. He said with the medical exemption which Levell has received from the JAAA’s medical team, he will be considered for selection in the sprint races.

“He will be considered for selection, but I am not sure what part he will play in the team. It is up to the selection committee to determine that,” said Powell.

“He is training well and he is feeling confident at the moment, but he will be going back to the doctor for a further assessment next Monday,” he added.

The JAAA’s selection policy has a provision that allows top-ranked athletes, who can prove that they were unfit to compete at the trials, the opportunity to show their return to fitness at a later date.

Levell who has had an outstanding year is the fastest Jamaican junior this season in the 200m with a time of 20.53 seconds. He is also the fifth fastest Jamaican in the 100m with a best of 10.25. Only Sandrey Davison of St Catherine High School with 10.20, Jeevan Newby of Kingston College, 10.22, Bouwahjgie Nkrumie, also of KC, with 10.22, and Deandre Daley of Herbert Morrison High School, 10.23, have run faster than Levell in the shorter sprint this season.

Levell completed back-to-back wins in the 200m at the ISSA/GraceKennedy Boys and Girls’ Championships and also won the event at the Carifta Games in April this year.

Powell added that Levell has looked well in training since his return from injury and, therefore, he is looking forward to representing the country in Cali, Colombia.

“Mentally he is alright because his mind is in the right place now and he is not worried about the injury. He has always kept himself in tip-top shape,” he said.

“The focus is the World Under-20 Championships, and once he is selected then he is definitely going to do well for the country. He believes in his training, he believes in his recovery and so he is in a positive frame of mind and looking forward to the championships,” Powell said.