Jones has high hopes for Williams at World Under-20 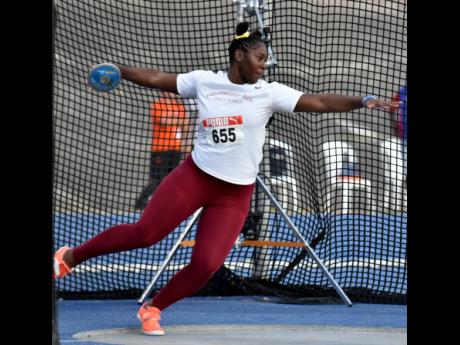 Dwight Jones, the coach of national junior discus record holder Cedricka Williams, says he has high hopes for the athlete ahead of next month’s World Under-20 Championships in Cali, Colombia. “Last year she made the top eight. This year the aim is...

Dwight Jones, the coach of national junior discus record holder Cedricka Williams, says he has high hopes for the athlete ahead of next month’s World Under-20 Championships in Cali, Colombia.

“Last year she made the top eight. This year the aim is definitely to get a medal, so we will be working towards that, and hopefully, at the championships, that can become a reality,” Jones said.

Williams, a Holmwood Technical High School student, set a national junior record of 56.21m to win at the recently concluded JAAA National Senior and Junior Championships at the National Stadium.

This mark tied Williams with China’s Zhichao Jiang for second on the under-20 world ranking behind Sweden’s Emma Sralla, who has the world-leading mark of 56.38m.

Jones said he is happy with Williams’ performance in the event so far, but there is still work to be done.

“I am elated. It was on the cards. We had trained for it,” Jones said. “There are still areas to work on . For the next couple of weeks we are going to be putting in some work in those areas so that we can get ready for the World Under-20.”

Williams is just 18 years old, and Jones says she has the potential to become a standout athlete for Jamaica.

“There is time for her to improve and become a standout senior athlete. Within another four or five years she should be doing really well,” he said. “I am expecting her, just as she broke the (national) junior record, to go on and become the national (senior) record holder in the event and possibly be one of the first Jamaicans to medal in one of the top championships on the female side.”

Jones said he would like to see more high-performing discus throwers in Jamaica, but for the island to achieve this, the country has to move away from the traditional selection process of athletes for the event.

Williams won the national junior title ahead of Abigail Martin of St Jago High School, who was second with 51.13m. Britannia Johnson of Camperdown High School was third with 47.32m.