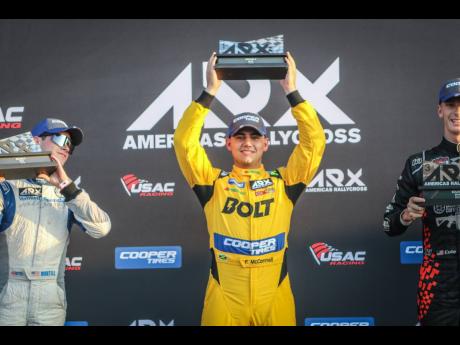 He said this is why he takes advantage of the rallycross platform to spread the culture.

“To have an opportunity to spread our culture and let people see how great we are on an international stage is something that I could never let an opportunity blow up like that,” McConnell said.

Although only 23 years old, he has had a lot of experience in motorsports, including go-karting, circuit racing, off-road racing, and is now focused on rallycross racing.

McConnell said he is proud to have represented Jamaica at all these stages of his career.

“I’m just waving the Jamaican flag as high as I can on this path, and it has opened a lot of eyes so far,” he said.

“I feel so patriotic because I’m proud to be Jamaican, I am not afraid to say it out loud and show it in people’s faces.”

McConnell has shown so much passion in sharing the Jamaican culture that the Jamaica Tourist Board made him an ambassador for the country.

“It’s a very infectious culture and Jamaica Tourist Board has seen that,” Fraser said.

“For them to make me an official ambassador is an amazing milestone for me and I am so happy that they see value in me and the Team Frazzz brand to go out there and do what I do best and show Jamaica to the world.”

He said this gives him an opportunity to promote the island’s culture to people who might not know about it or know that Jamaicans do rallycross racing.

“Not many people have had an interaction with a Jamaican person, so many times I have the honour of being the first and, for them, it’s shocking (because) rallycross is a European-dominated sport,” McConnell said.

“So I’m doing my best to represent my sponsors as well as my country and giving it a 130 per cent.”

This year, McConnell became the first and only Jamaican to claim a supercar victory in the Rally X Nordic league.

McConnell noted that the motorsport culture is very much alive in Jamaica and he wants the world to know.

“The motorsport culture is very strong and everybody loves fast cars and loud cars - and that’s exactly what rally and rallycross is. Loud cars and sideways and dirt flying up in the air is very popular in Jamaica.”