ISSA looking to bring the vibes 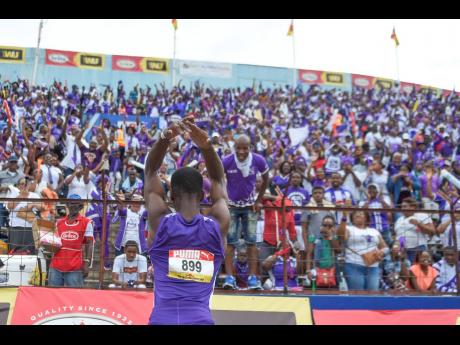 File
Akeem Weir of Kingston College (KC) celebrates in front of a section of the KC supporters after winning the Class Three boys 400m final at the ISSA/GraceKennedy Boys and Girls’ Athletics Championships at the National Stadium on Saturday March 30, 2019.

While today’s final day of the ISSA/GraceKennedy Boys’ and Girls’ Athletics Championships (Champs) will be without its usual spectacle given the lack of fans, Champs committee chairman Richard Thompson says that they will do their best to provide a semblance of the festive atmosphere usually evident on ‘Super Saturday’ inside the National Stadium.

The consequences of a spectator-less championships, brought about by the strict COVID-19 safety protocols under which the event is being staged, has resulted in an absence of the colour and carnival-like energy that has become customary.

Although Thompson knows that they could never replicate the atmosphere that the final day normally brings, they are looking to use creative means to bring the vibes inside the venue for the grand finale.

“So outside of the excitement on the track and on the field, we have made some effort in terms of having drummers come and to give the athletes some vibes, some energy going into their events,” Thompson told The Gleaner. “We also have some sound effects as well that we play as a means to energise and to encourage them and motivate them.”

The drummers are from the band Magnificent Troopers and were present for the opening ceremony and were among the total group of persons that were tested prior to the event, according to Thompson.

“We had concerns as to how that would look given that this is a no spectator event, but we have considered and consulted and the fact that they are a part of the production, they would add to the experience that athletes will have,” Thompson shared.

Edwin Allen girls’ team captain Ackelia Smith, who won the triple jump title yesterday, believes the drummers brought a bit of the atmosphere back to the stadium.

“It was great. It kind of brought back the vibes that we are used to at Champs,” Smith said.

Additionally, Thompson said that they will be offering a virtual experience so that fans will feel a part of the final day’s action.

“For our viewers online, we are planning a Zoom party. So that is another thing that we are doing to engage our fans to kind of give them a vibe as to what is happening in the stadium as well,” Thompson said.

With an eye towards next year’s staging, Thompson said that they are hopeful of having fans return to the stadium even at a limited capacity.