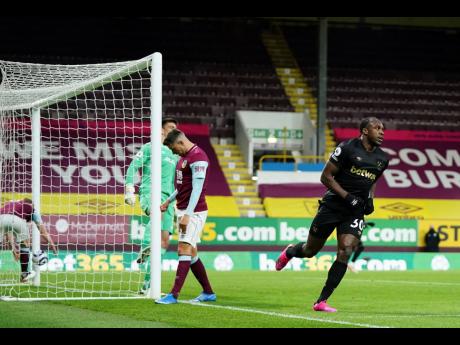 Michail Antonio, expected to represent Jamaica at the Concacaf Gold Cup this summer, returned from injury to revive West Ham’s push for European qualification with both of the team’s goals in a 2-1 win at Burnley in the English Premier League (EPL) yesterday.

Playing his first game in a month after a hamstring problem, Antonio scored in the 21st and 29th minutes as West Ham hit back after Chris Wood’s 19th-minute penalty for Burnley.

West Ham’s 17th league win of the season, a club record in the EPL era, moved David Moyes’ team to within three points of the top four as they recovered from back-to-back losses against Newcastle and Chelsea.

West Ham’s players made the trip north having lost four of their last eight in the league, as many as they had lost in the previous 23, and at risk of seeing a promising season unravel.

West Ham behind on penalty

And they fell behind when Burnley were awarded only their third penalty of the season.

Ashley Westwood’s floated pass forward to Wood flummoxed Issa Diop, who allowed the New Zealand striker to recover the ball on the byline and try to turn back towards goal. He was upended by Tomas Soucek as he did so.

And it was Wood, fresh from his hat-trick in the 4-0 win at Wolverhampton last week, who stepped up to fire home his 11th goal of the season, though the advantage would prove short-lived.

After Dwight McNeil lost possession to Pablo Fornals close to his own area, Jesse Lingard laid the ball off for Vladimir Coufal to cross, and Antonio got between Matt Lowton and James Tarkowski to head home from close range.

The turnaround was complete before the half-hour mark. Antonio was the only West Ham player in a penalty area crowded by Burnley defenders, but was somehow allowed to ghost through and flick Said Benrahma’s teasing cross beyond Nick Pope.