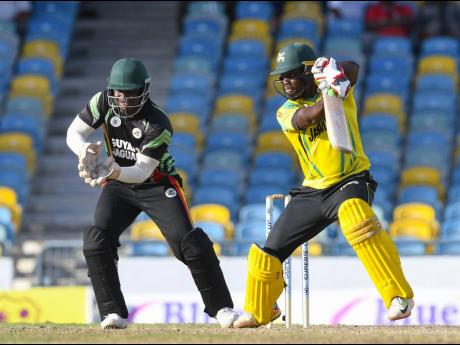 File
Jamaican batsman Nkrumah Bonner hits a four during a semi-final match of the Super50 Cup between Guyana Jaguars and Jamaica Scorpions on Thursday, October 25, 2018, at Kensington Oval in Barbados.

Cricket West Indies (CWI) is hoping that an accelerated roll-out of COVID-19 vaccines by regional governments can result in a sufficient improvement in health conditions so as to facilitate the staging of first-class cricket in coming months.

The governing body has been banking on a shortened first-class season, but with COVID-19 cases rising in several countries, speculation over a cancellation has heightened in recent weeks.

However, CWI chief executive Johnny Grave said they remained “optimistic and hopeful” of an improvement in the pandemic so some amended version of the first-class season could be staged before the Caribbean Premier League (CPL), which is scheduled to get under way in August.

“We want to hold on to the possibility of playing some four-day cricket at some point this summer until it becomes absolutely impossible from a logistics and COVID perspective,” Grave said.

“If we cannot have regional first-class cricket, we will do our best to play whatever four-day cricket we can at the highest possible standard, so we’re still looking at options.

“We continue to have to be very agile and adapt our plans, and we don’t want to make an easy decision and say no first-class cricket until 2022. We want to hold on to whatever possibilities we’ve got, and we hope that the situation from a COVID perspective – vaccines rolling out and regional travel – will improve,” Grave added.

“We’ve been saying that now, not just in the Caribbean, but the world has hoped for months and months and months, but we’re still in the midst of it. We’re optimistic and hopeful, but at some point, playing four-day cricket before the CPL will become apparent or not,” Grave said.

NO CRICKET SINCE MARCH

There has been no regional first-class cricket since last year March, when CWI pulled the plug on the season, with two of the 10 rounds remaining, due to the onset of COVID-19 in the Caribbean.

CPL organisers proceeded with the popular Twenty20 championship in a “bio-secure” bubble in Trinidad, and it was hoped that a similar template could be utilised this year for the four-day season.

CWI staged the Regional Super50 in Antigua last February and last month, hosted the first international tour in over a year, when Sri Lanka toured the region for a full series of two Tests, three One-Day Internationals, and three T20 Internationals, with all games also played in Antigua.

Grave said that while there were benefits, especially in the current COVID environment, to hosting entire tournaments in one country, there were disadvantages as well.