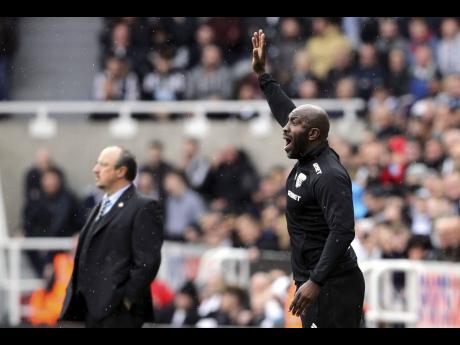 Humble Lion Head Coach Andrew Price and former national assistant Bradley Stewart have welcomed the appointments of former Reggae Boyz Darren Moore and Jobi McAnuff to head coaching positions in England as a positive move to increase the complement of minority coaches in the country.

The 46-year-old Moore, who made three appearances for the team between 1999 and 2000, recently left English League One side Doncaster Rovers for English Championship strugglers Sheffield Wednesday. McAnuff, who signed with League Two outfit Leyton Orient in a player-coach role, was recently named the club’s interim manager, following the departure of Ross Embleton after seven straight games without a win.

Price hailed both former Boyz on their recent appointments, saying that it shows improvement in increasing the diversity of managers within the English football pyramid and he believes that it can open doors for former national players as well.

“Not a lot of black coaches get opportunities in the UK. So it’s definitely progress that these two gentlemen are given an opportunity to be the gaffers at clubs in England,” Price told The Gleaner. “I think it opens the doors for not only former Jamaican players, but also players of minorities that they can get the job done once they show the right acumen.”

This is not the first managerial appointment for Moore, as he was named interim manager of West Bromwich Albion in 2018 after the firing of Alan Pardew following the club’s failed attempt to avoid relegation that season. Moore was named as the club’s permanent manager and guided the outfit to the Championship play-offs the following season. However, he was dismissed in 2019.

This will be McAnuff’s first coaching job, despite a delay in finishing his UEFA A licence.

Stewart, in congratulating both men on their new jobs, said that there might be increased pressure because they did not initially represent England at the international level before management, but is rooting for their success to unlock greater opportunities in the future.

“As a coach, it means that much more, in terms of the respect that (the clubs) have for those two players in terms of their coaching,” Stewart said. “Hopefully they will implement what is appropriate for the environment that they are in and that this allows them to stay long in the job and do well in terms of getting results, and hopefully they get a chance to move up.”

Price is particularly excited to see McAnuff’s progress and believes that he has a chance to become the club’s permanent manager should he have a good season.

“Now that he (McAnuff) has moved to the head coach position, I think he will do well. He’s a good student of the game and I think he would do well,” Price said.

McAnuff registered his first win for Leyton Orient as manager on Tuesday, defeating Grimsby Town 1-0 to end their winless run. Having set a target to qualify for the League Two play-offs, Orient’s second match under McAnuff will be away to Exeter City today. Meanwhile, Moore’s first game as Sheffield Wednesday’s manager is today against Reading. Sheffield are currently in 23rd place and fighting to avoid relegation to League One.