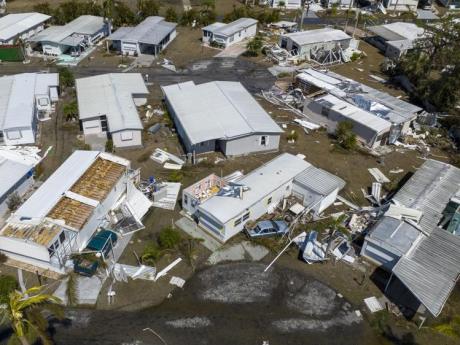 This is an aerial view of a damaged trailer park after Hurricane Ian passed by the area Saturday, October 1, 2022, in Fort Myers, Florida. (AP Photo/Steve Helber)

FORT MYERS, Fla. (AP) — Rescuers evacuated stunned survivors on a large barrier island cut off by Hurricane Ian and Florida's death toll climbed sharply, as hundreds of thousands of people were still sweltering without power days after the monster storm rampaged from the state's southwestern coast up to the Carolinas.

Florida, with nearly four dozen reported dead, was hit hardest by the Category 4 hurricane, one of the strongest to make landfall in the United States.

Flooded roadways and washed-out bridges to barrier islands left many people isolated, amid limited cell phone service and a lack of basic amenities such as water, electricity and the Internet.

Florida utilities were working to restore power. As of Sunday morning, nearly 850,000 homes and businesses were still without electricity, down from a peak of 2.67 million.

At least 54 people were confirmed dead: 47 in Florida, four in North Carolina and three in Cuba.

The weakened storm had drifted north on Sunday and was expected to dump rain on parts of Virginia, West Virginia, Maryland and southern Pennsylvania, according to the National Hurricane Center, which has warned of the potential for flash flooding.

More than 1,000 people were rescued from flooded areas along Florida's southwestern coast alone, Daniel Hokanson, a four-star general and head of the National Guard, told The Associated Press while airborne to Florida.