‘It would be irresponsible’ 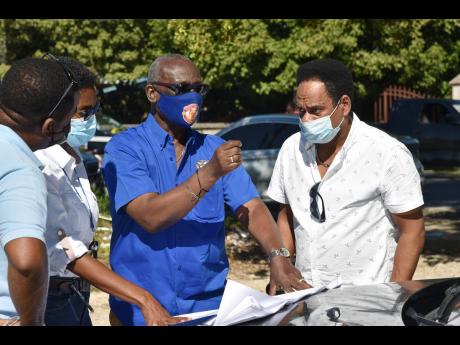 Photo by Herbert McKenis
Local Government Minister Desmond McKenzie (second right) discussing plans for the construction of the Negril fruit and vegetable market yesterday with (from left) Wray Mullings, structural engineer in the Ministry of Local Government and Rural Development; Ava Murdock, superintendent of roads and works at the Westmoreland Municipal Corporation; and Dwight Wilson, chief technical director in the ministry.

Asked by journalists whether the Government was contemplating a vaccine mandate as he toured parts of western Jamaica on Wednesday, McKenzie made mention of the situation within the football fraternity.

“The Government has stated that we are not going to be mandating or force anybody to be vaccinated. Persons have to take personal responsibility at this time. It cannot be what the Government is doing. It has to be what are we (Jamaicans) doing to safeguard and to ensure that persons get vaccinated,” he stated.

He argued that claims that the Government was abandoning the process were far from the truth.

“Questions are being asked why are we not allowing vaccinated persons to participate [as spectators]. We did that with the Jamaica World Cup game recently. We were in discussions with the Jamaica Football Federation (JFF) around having spectators for the next home game,but, because of this new outbreak, it would be irresponsible, based on the dangers of this thing, to have mass gathering now,” he stated.

Describing the fourth wave of the COVID-19 pandemic affecting the country as a “hurdle”, the local government minister argued that, once the nation has passed the worst, the Government’s stance could be reviewed.

JFF President Michael Ricketts recently expressed his “disappointment” with the decision not to allow spectators at the upcoming home games, arguing that it could affect the advantage that usually comes with the staging of such games.

The JFF stands to lose much-needed revenue, which would have been generated from gate receipts, at the games, as well as the 12th-man effect from the presence of the supporting home crowd.

The last home game at which spectators were allowed saw an estimated 4,000 persons turning out to the the National Stadium on November 16, 2021.