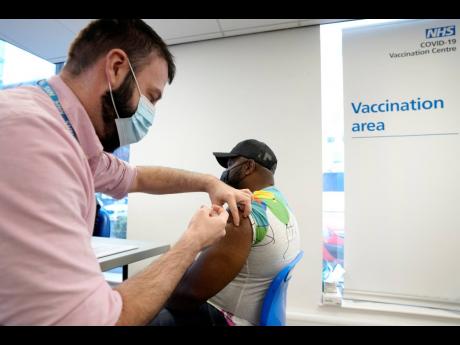 AP
Britain says it will offer all adults a booster dose of vaccine within two months to bolster the nation’s immunity as the new omicron variant of the coronavirus spreads. New measures to combat variant came into force in England on Tuesday, with face coverings again compulsory in shops and on public transport.

Almost two years into the pandemic, Black people and members of other racial and ethnic minorities in Britain are still dying with the coronavirus at higher rates than white residents, likely because of lower vaccination rates, a government-commissioned report said last Friday.

The research found that vaccination has sharply reduced COVID-19 death rates for people of all ethnicities. But Black and South Asian Britons die at higher rates even though white people are more likely to test positive for the virus.

“In the first two waves, the higher death rate seen in ethnic minorities was primarily due to their higher risk of infection compared to whites – particularly in older age groups,” said Dr Raghib Ali, the British government’s independent adviser on COVID-19 and ethnicity.

In recent months, Ali said, “we are seeing lower infection rates in ethnic minorities than in white people, but rates of hospital admissions and deaths are still higher, with the pattern now matching levels of vaccine uptake in higher risk groups.”

British health officials have launched information campaigns and worked with community groups and religious leaders to combat vaccine hesitancy among ethnic minorities. Ali said they have had some success, with vaccination rates in older Black African and Pakistani people seeing the biggest increase of any group in the six months before October.

But overall vaccination rates remain highest in white people and lowest in Black groups. About 90 per cent of adults in Britain have had at least one vaccine dose, but the figure is under 80 per cent among Asian communities and less than two-thirds among people from Black African and Black Caribbean backgrounds.

The government appointed Ali after it became clear that some ethnic groups were being hit harder than others by COVID-19.

Research has highlighted multiple factors. Some ethnic groups have higher prevalence of underlying health conditions and are more likely to live in large, multi-generational households. People from ethnic minorities also hold a big share of front-line jobs, such as taxi and mass transit drivers, that saw high infection rates early in the pandemic.

Equalities Minister Kemi Badenoch said the “understanding of how COVID-19 affects different ethnic groups has transformed since the pandemic began.”

“We know now that factors like the job someone does, where they live, and how many people they live with, impacts how susceptible they are to the virus, and it’s imperative that those more at risk get their booster vaccine,” she said.

The U.K. government is aiming to offer everyone 18 and up a third, booster dose of vaccine by the end of January. Health officials hope the increased protection will help keep the new omicron variant at bay, even if it proves more resistant to vaccines than other strains.

Much remains unknown about the variant, including whether it is more contagious, as some health authorities suspect, whether it makes people more seriously ill, and whether it can thwart vaccines.

Britain has confirmed several dozen cases of omicron – including a cluster linked to a concert by pop group Steps in Glasgow – and authorities say the variant is spreading in the community. But the delta variant remains by far the dominant strain.

Britain has recorded more than 145,000 coronavirus deaths, the highest toll in Europe after Russia.

While several other European countries have imposed new restrictions on daily life or introduced vaccine mandates, Britain has held back, though masks are once again mandatory in shops and on public transit.

Amid jitters from businesses that holiday-season trade is at risk from the new variant, the Conservative government urged people to continue to shop and socialise.

“The message to people, I think, is fairly straightforward – which is: keep calm, carry on with your Christmas plan,” Conservative Party chief Oliver Dowden said.