‘They are my heroes’ 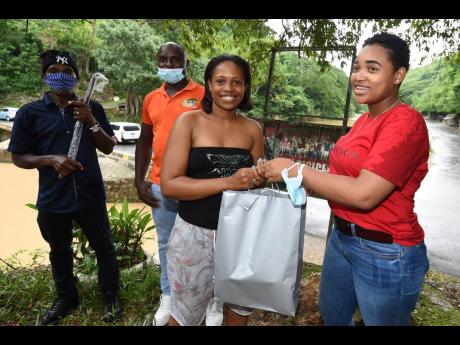 Kenyon Hemans
Denesha Scott, sister of Jermaine Scott who was rescued from the Rio Cobre after his car plunged into the river present a bag to Zina Slew during a handover ceremony at Flat Bridge on Saturday. Also photographed was Dwayne Stapleton (right) and Samuel Dixon one of the Flat Bridge divers. 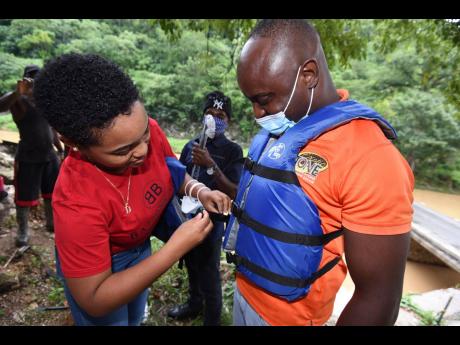 Kenyon Hemans
Denesha Scott, sister of Jermaine Scott, who was rescued by divers in May after his car plunged into the Rio Cobre, assists Dwayne Stapleton to fit a a life jacket during a handover ceremony in the Bog Walk Gorge on Saturday. Looking on is Samuel Dixon, one of the Flat Bridge divers. 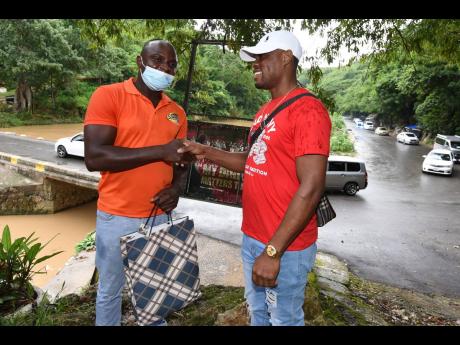 Kenyon Hemans
Jermaine Scott (right) presents a bag to Dwayne Stapleton during al handover ceremony at Flat Bridge on Saturday. Scott and his sister donated the equipment to the divers after they saved his life in May.
1
2
3

After experiencing a near-death experience when his car plunged into the Rio Cobre after it blew a tyre and he was saved by the heroic efforts of Flat Bridge divers on May 8, Jermaine Scott has reciprocated.

On Saturday, joined by his sister Denesha Scott and his mother virtually from the US, he presented diving equipment to the divers who were instrumental in rescuing him from the deadly waters of the Rio Cobre, and other divers who from time to time are involved in rescue operations.

Dwayne Stapleton, otherwise called ‘Lizard’, the diver who carried out the final rescue of Scott, along with female diver Zina Slew, Samuel Dixon and Lionel Robinson who were on hand for the presentation, all concluded that the two life jackets, two complete snorkelling sets, a pair of crowbars and rope were a gesture that they have never witnessed coming from anyone they have rescued before.

“They are my heroes,” said Scott who, with his sister by his side, made the presentation.

“We are here to show them how much we appreciate what they are doing for the people of Jamaica,” Scott continued, adding that they would have loved to do the presentation on National Heroes Day, but, because of impending lockdown restrictions, they had to do it on Saturday.

Scott, who worked at a hotel on the north coast, was driving towards Spanish Town when, on reaching the Flat Bridge, one of the tyres on the car blew after hitting a pothole, and it ended up in the Rio Cobre.

Unable to swim, he panicked, but was able to free himself from the vehicle and stood on it just before it began to sink. According to him, the will to survive was foremost in his mind, even as the first attempt to rescue him by another diver who goes by the alias ‘Chupsy’ failed because he was not held properly and he had to let go of Scott who by this time had started to sink.

Stapleton, who has done numerous rescues in his 14-year diving career in the Rio Cobre, said, after he saw that Chupsy had to let go of Scott, he knew he had split seconds to act. So he jumped into the water and swam towards where Scott was already sinking.

“It was the most difficult save mi ever done, him actually a sink already and it was very difficult to get him on him back to float with him, even though when you in a water you light like cork, but it hard to help the person when they start to sink,” he said, explaining the principles of buoyancy.

Stapleton said, during the entire process, all he was thinking is that he had to save this young man to give him another chance in life.

The diver, while lauding the gesture by the Scott family and citing the importance of the equipment in future rescue operations in the Bog Walk Gorge, given the frequency of these accidents, was however very critical of the lack of support that the Flat Bridge divers received, even though they are performing a very important function saving lives.

“Over the years, we ask for equipment and gear and a little incentive to keep us, but nothing. A man will see a car run off and nobody nuh move because we nuh get nutten to encourage we, so we glad to see that somebody out of all the people dem weh we rescue come back and sey thanks,” Stapleton said.

Denesha Scott declared that the divers are now a part of the Scott family and they will be visiting them going forward to check on their well-being. She extended thanks to Tracy Matalon and Big Brothers Truck Parts for their contributions to the presentation.