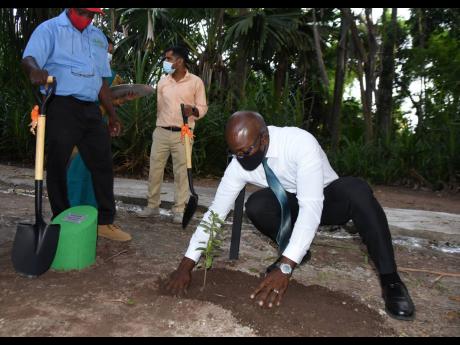 Amid setbacks brought on by the pandemic, the Government is still pressing ahead with its plans for the Three Million Trees in Three Years initiative, which has little over a year to go before its climax.

The Three Million Trees in Three Years initiative was launched in 2019 by Prime Minister Andrew Holness and is aimed at planting three million timber and ornamental trees over the next three years, and expanding forested areas, including public and private forests.

On National Tree Planting Day 2021, which was nationally recognised recently, Pearnel Charles Jr, minister of housing, urban renewal, environment and climate change, told The Gleaner that the pandemic has impacted the project.

“COVID has challenged the programme in how we can reach them [our target groups]... It has impacted everything in terms of our ability to go around, in terms of physical interaction but we’re still on our way and we should still reach our target,” Charles Jr said.

“We’re sticking to our timeline. Some of the challenges that we’ve seen are, of course, just in terms of how our staff can interact with the schools. We had a very comprehensive programme that would have caused us to be doing a lot of interactive activities with children and staff at schools. That has had to be slowed down, of course, because of the COVID protocols,” he added.

Charles said as “soon as we are able to, our [the Government’s] intention is to ramp up and to press the gas in terms of that kind of activity”.

He told The Gleaner that more than 700,000 trees have been distributed and planted in terms of the seedlings.

“We have up to 1.8 million pledges. Every day we are developing and strengthening our partnerships, so we should be on track with our three million trees,” he said.

Charles said: “Most importantly, we are now going to schools, churches and communities to make sure that we’re not just planting trees to reach a number, but that we’re integrating and understanding the importance of trees, and really putting into the minds of our youngsters the role they can play now, as stewards of the environment.”

The minister emphasised the need to plant trees as they provide food, shelter and, most important, the oxygen humans need to live.

National Tree Planting Day is celebrated on the first Friday in October each year and supports the Government of Jamaica’s climate change efforts. It was launched in 2003 and aims to raise awareness and get people involved in the tree-planting initiative.