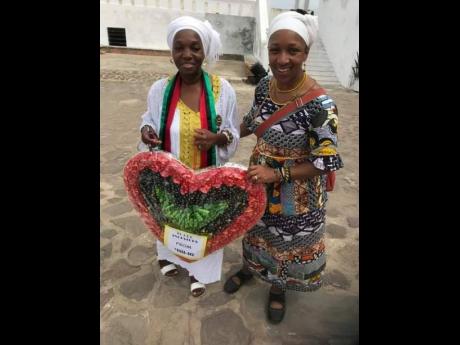 Contributed
Garveyites Jasmine Pitter and Sophia Walsh-Newman hold a wreath for the ancestors from the Universal Negro Improvement Association/African Communities League to lay at the dungeons at Cape Coast Castle where captured Africans were kept before they were put on ships sailing to the West Indies. 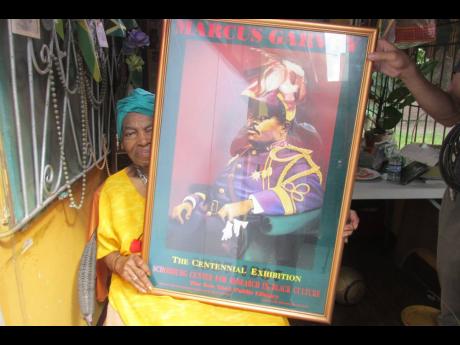 FUNDAMENTAL TO Marcus Garvey’s philosophies was the message of black pride and black economic empowerment, self-acceptance and African unity. Among his legacy is the Universal Negro Improvement Association/African Communities League (UNIA-ACL), which still has active branches all over the world.

His campaign for equality and equity was to influence the 1960s’ civil rights movement in the USA, not to mention the current fervour and essence of the Black Lives Matter movement (ALM). The flag of the UNIA is a ubiquitous and well-recognised symbol in ALM marches. It is one of the tools that some black people are using to manifest this message. Sophia Newman-Walsh is one of these people.

“Marcus Mosiah Garvey, Malcolm X and countless others’ message of black pride continues to resonate with and uplift generations today. I strongly believe in the upliftment of the black community. Wherever I go, wherever I am located, I try to represent myself in a way that resonates the legacy of ‘Africa for the Africans, those at home and those abroad’ in the way that I live and dress; demonstrate and teach the cultural arts, folk arts and edutainment among my community and those who are yearning for knowledge of self, self-development and self-reliance,” she told The Gleaner.

Walsh-Newman, a Jamaican living in Queens, New York, is a member of UNIA-ACL Division 432 and is serving as a Universal African Black Cross Nurse. She recently served as a member of the UNIA-ACL Constitution and Resolutions committees. She was also events coordinator and a member of the 2019 Convention Committee to Liberia.

Newman-Walsh further said, “As a black woman, long-time Garveyite and recent UNIA-ACL member, Garvey’s message of black pride has been instrumental in my development in accepting myself as a black queen, without the need to accept any Eurocentric ideals of beauty. I am most certain that Garvey and Garveyism have also had a positive influence on countless other black women, in this same regard of black beauty over Eurocentrism.”

Garvey’s black pride message has certainly resonated with many black women from the get-go, they bearing the brunt of much discrimination because of their physical features. They played a significant role in the spreading of the message and the efforts to keep it alive. It turned the late Queen Mother Miriamne Samad into a quintessential Garveyite, who used Garvey’s message to help many black people to take pride in themselves and how they look.

Samad, who created the dashiki, was born in Harlem, New York, and grew up in a home of Garveyite parents. Garvey’s message of black pride and self-acceptance was etched in her brain from she was a tot. In speaking with The Gleaner in 2018, she recalled her mother telling her that Garvey tousled her hair and told her she was going to be a great woman someday. The then Muriel Allman evolved into a very active Garveyite who renamed herself and brought “dignity into being black”.

That dignity was partially demonstrated in the way in which she dressed herself and others. This tailor by training founded the Solomon and Sheba Fashion Shows, and would stage fashion parades and benefits in community churches, halls, and theatres. She would teach the virtues of African culture with clothes, their meaning and history through her Soncure Nubian Cultural Models and Workshop.

Her work as a Garveyite, and black pride activist/teacher, transcended state borders, as she was invited by people she did not know to share her knowledge through her lectures, shows, fashion parades and demonstrations. Her work started, of course, in the US, but Jamaica was where it ended. Here, she spent decades keeping the messages of Garvey alive by way of teaching them, up to the point when she became ill before transitioning to ancestral realm.

To Samad, Garvey’s legacy was rich. She regarded him a black leader, a black mentor, “a black somebody to look up to”; a black man who told her who she was, and she believed him “without apology”.

However, Corine Smith does not believe Garvey’s message is relevant today. As a young woman, her husband was mentored and supported by Garvey’s second wife, Amy Jacques, with whom she herself had become acquainted, and from who she has learned much about Garvey.

“Up until now, they not loving themselves, for dem a bleach and a put on powder. It is not now the people are not listening. I don’t believe they are listening. They don’t want to hear it. They are ashamed of their colour. When you go down to the market, the amount a woman mi see a bleach. What the hell is going on?” Smith asked incredulously.