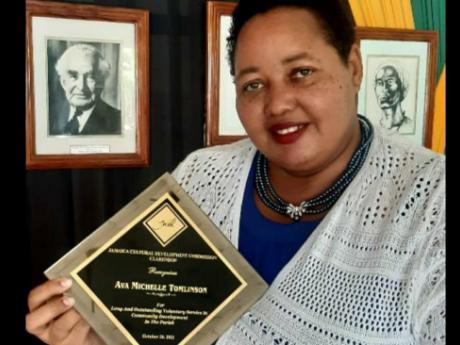 Contributed
Ava Tomlinson shows off the award she received for community service and volunteerism at a Heroes Day ceremony in Clarendon yesterday.

Ava Tomlinson has been a staple in Clarendon’s fight to vaccinate its residents against COVID-19.

She was instrumental in coordinating three vaccination drives, which saw 932 residents of Longville Park getting jabs, while actively urging residents to be vigilant, sharing information and tips surrounding the virus.

“It’s a tribute to selfless givers, such as my late mother, grandmother and the team I serve with at Longville Park,” she said of the honour.

Tomlinson, who has a teenage son and a full-time job, makes use of her early mornings and late nights to balance the many initiatives she is involved in throughout the parish.

Born prematurely on International Women’s Day – March 8 – and spending her first days of life in an incubator at the Percy Junor Hospital, it would seem she was primed for the life she is now living.

Or it could be her linage? As while pregnant, her mother spent her evenings teaching at the Jamaican Movement for Advancement of Literacy (JAMAL), now the Jamaican Foundation for Lifelong Learning, helping youth improve literacy and other skills, also teaching young ladies to do exquisite embroidery and crochet pieces.

Tomlinson said her community involvement goes as far back as she can remember.

“Whichever community I lived in, I served. As a child, I was a Brownie and service was a part of its mantra, and in high school at Knox College, the motto was ‘Strive to Serve and not to Yield’. I coordinated fundraisers for my UNESCO club, [I was] house captain and did tree-planting,” she told The Gleaner.

While at Knox Community College, under the mentorship of Helen Stills and Dr Errol Miller, Tomlinson served Clarendon as Farm Queen and dominated public speaking regionally as a participant in the Association of Science Teachers of Jamaica competitions.

Upon graduation and by then employed, she spent her evenings at the Ministry of Education or at then Mico Teachers’ College’s female dorm with the soldiers, volunteering to assist the National Youth Service (NYS).

“I remember being at the NYS launch at Denbigh Showground. As Clarendon’s Farm Queen, on weekends, I would be all over Clarendon, wherever there was a Jamaica Agricultural Society meeting with farmers,” she recalled.

After becoming a homeowner in Longville Park, she was mentored and recruited into the community’s involvement by Baldvin McKenzie and Rosemarie Langoth to coordinate numerous events, including health and environment fairs, Christmas tree-lighting competitions as she also took charge of social-media campaigns.

Later, she served as a vice president of the Community Development Committee, assisting with negotiations with FLOW, the National Housing Trust and the National Water Commission on the residents’ behalf.

“I did numerous proposals, most notable was the community centre healthy zone proposal, which built and fenced a jogging trail for the Phase II with support from the Ministry of Health in 2007,” she highlighted.

Tomlinson credits her dedication to service to lessons learnt from her mother and grandmother in Sanguinetti.

“Each Sunday, I had to carry dinner to someone else, usually the elderly,” she said, noting that her mom always gave “from the little she had”.

That spirit of kindness, Tomlinson said, is also in her siblings, Doreen and Cheryl, too.

Expressing that her wish is for her son to live in a better society and value humanity, Tomlinson is urging other Jamaicans to also embrace the spirit of volunteerism.